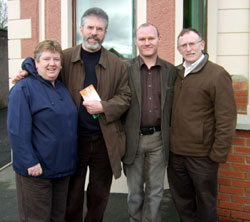 The last time I stood in Connolly House was in September 2004, on the day that Sinn Féin revealed that a highly sophisticated bugging device had been uncovered under the floorboards of an upstairs office.
The bug was fitted with a directional microphone that pointed into the downstairs meeting room, where the Sinn Féin leadership had hosted many meetings with those influential Irish-Americans who came to play such an important role in developing the peace process.
That was just the latest example of British duplicity in their dealings with republicans in the course of this conflict.
So on Saturday, 24 February, as we gathered for the official opening of Connolly House as the Upper Falls constituency office and advice service, I listened to the Sinn Féin President Gerry Adams as he reflected on the turbulent history of a building that has become synonymous with the political development of Sinn Féin.
Adams remembered activists such as Joe Keenan, who wittily remarked that Sinn Féin was “into the politics of the big house” when the party bought the premises in 1983.
Joe is now dead, as is Seán Keenan, who was elected to Belfast City Council in 1985. He was based in Connolly House. Michael Ferguson, who died last September, made Connolly House his “home from home” as he spent so much time there working in the interests of the people of West Belfast.
Adams also remembered Mary Hughes, who as secretary to Cúige na Sé Chondae played a key organisational role in the development of the party from her attic in Connolly House.
The Sinn Féin President recalled 1984, when the RUC shot Seán Downes dead with a plastic bullet just outside its doors.
He recounted the occasions when unionist death squads attacked the building. In early 1994 a series of attacks saw unionist paramilitaries attach a grenade, with a trip wire, to hedges just inside the gate. Within days they attacked again, using an RPG 7. Then a gunman opened fire on three men as they were building a blast wall to protect the office from similar attacks. There was a common thread running through these incidents.
Adams reminded his audience that the grenade and rocket launcher used in the Connolly House attacks were brought into Ireland by the Ulster Resistance organisation.
“It was the DUP who set up Ulster Resistance,” said Adams.
He then referred to the DUP’s election slogan of the 1980s and 1990s – “Smash Sinn Féin” – and how Ian Paisley was famously pictured with a sledgehammer, at a time when unionist death squads were using them to smash into nationalist homes.
“Twenty-five years ago the DUP thought they could smash this party. Now, they are within weeks of agreeing to go into a power-sharing executive with Sinn Féin. Clearly Sinn Féin, through the peace process, has transformed the North’s political landscape and it is against that backdrop that next week’s election is being fought. This election is about the future,” Adams said.