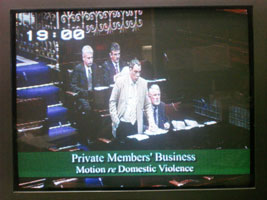 Sinn Féin this week sought to strengthen laws against domestic violence in the 26 Counties.  Justice and Equality Spokesperson Aengus Ó Snodaigh TD moved a motion in the Dáil aimed at ending the nightmare of domestic violence in Ireland.
Speaking on Tuesday at the beginning of a two-day, Sinn Féin-sponsored debate, Ó Snodaigh said, “I am commending this Sinn Féin motion to the House and I am confident that everyone here who is genuinely determined to address domestic violence will support it.
“This Government, and the Minister for Justice in particular, pose as though they are tough on crime.  But they are nothing but posers.  Because men, women and children are being beaten in their homes tonight and very little is being done about it.  Successive governments have failed to treat crimes of domestic violence with the priority they require.”
The Sinn Féin motion calls on the Government to introduce an effective sanctioning system and to publish and schedule time for legislation amending the Domestic Violence Act 1996 as a matter of urgency. It seeks a guarantee of funding for frontline services such as refuges, outreach, counselling, court accompaniment and transitional housing.
Issues of gangland crime and anti-social behaviour, which are popular topics for media coverage, have prompted no end of government speeches, press statements and legislative proposals – most of which are both ineffective and unnecessary.  But domestic violence, the most prevalent of serious violent crimes, rarely features on their agenda.  The Government has no plan to secure convictions against these most violent of offenders. As a result the justice system fails to treat domestic violence as the serious crime that it is.
“This Government, along with the rest of the House, need to lead by example, by making it unambiguously clear that domestic violence is a serious crime and that it will be treated as such.  We need to legislate to give the relevant agencies, including the Gardaí, the DPP and the Probation Service, clear statutory roles and responsibilities, and to eliminate overly-restrictive requirements which prevent certain victims from accessing legal protections”, Ó Snodaigh said.
“And we need to resource the frontline services who are working on a shoestring to meet the needs of victims.  One extremely dedicated worker in the Dublin 12 Domestic Violence Service worked in the absence of employment security on successive contracts lasting a month, three weeks and then three months due to the ad hoc nature of funding available to this crucial community service.  The Government must guarantee core funding to frontline services on a multi-annual basis to allow for the strategic development and delivery of these essential supports.
“I urge all in this house to stand united against domestic violence and in support of victim safety and offender accountability.  I call on all to take united action and vote in support of the Sinn Féin motion.”
As An Phoblacht goes to print, the Sinn Féin motion is in its second night of debate and a vote is expected to take place late in the evening.
Aengus Ó Snodaigh said that if the motion is voted down, “Sinn Féin will seek to implement it as a party in Government.”