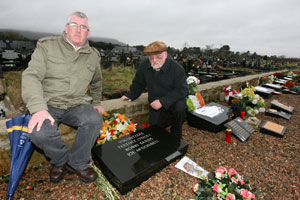 The graves of nearly 40 people have been desecrated by vandals in an overnight attack on the Republican Plot at Milltown Cemetery in Belfast.
Paint was thrown over the headstones, including those of former IRA Volunteer, Hunger Striker and Cavan/Monaghan TD Kieran Doherty and of Mairéad Farrell, Seán Savage and Dan McCann – three IRA Volunteers summarily executed by the SAS in Gibraltar.
The main memorial at the site in the cemetery off the Falls Road was covered in yellow paint.
It is the fourth attack on the plot in the last six years. In 2004, there was a series of attacks on republican graves, including that of former IRA Volunteer, Hunger Striker and Fermanagh/South Tyrone MP Bobby Sands.
Padraig McCotter of the Belfast National Graves Association slammed the latest act of depraved vandalism.
“Sixty-six British soldiers are buried in Milltown and not one of their graves is touched. That is the way it should be. The republican graves should be treated in just the same way”, he said.
McCotter said yellow paint which had been poured over the 1916 Proclamation on the Republican Monument at the plot was proving difficult to remove.