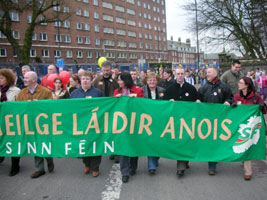 Saturday, 24 February 2007, was a mighty day for Irish language activists. Thousands marched to Belfast’s Cathedral Quarter to demand that the British Government enact an Irish Language Act.
The call to recognise the rights of Irish speakers in legislation was supported from throughout the island. Language groups from across the Six Counties marched. Pupils from scoileanna gaelacha throughout the North – wearing t-shirts, waving posters and banners and carrying balloons – brought a carnival-like brightness to the day.
Teachers marched with their pupils. Young and old, urban and rural, North and South, were all there to make the demand for equality heard.
“Acht na Gaeilge Anois: Tír gan teanga tír gan anam,” they shouted as they made their way down the Falls through Belfast city centre and into Writers’ Square across from St Anne’s Cathedral.
Bhí 5,000 nó níos mó ag scairteadh – “Acht na Gaeilge anois, tír gan teanga tír gan anam”  agus iad ag máirséail ón Chultúrlann go lár  na cathrach.
Ciarán MacGiolla Bhein of Na Gaeil Óga, the organisers of Saturday’s rally said the huge turnout would send a strong message to the British Government that there is massive support for an Irish Language Act.
During last November’s negotiations at St Andrews, Sinn Féin put pressure on the British Government and succeeded in getting it to introduce legislation at Westminster to recognise the rights of Irish speakers.
The consultation period on proposals for the Act ends on 2 March.
However, in time-honoured fashion, the unionist parties have set their faces against the Irish Language Act. Sinn Féin President Gerry Adams, one of the main speakers at Saturday’s rally, pointed out: “We must press to get the British Government to enact the legislation as soon as possible, before the Assembly gets in place.”
“Caithfidh Rialtas na Breataine an Acht seo a rith fríd Westminister.  Níor mhaith linn go mbeadh sé ag teacht ar ais arís insan tionál agus a bheith mar liathróid pholaitiúl ag na haontachtórí.” Arsa Gerry Adams
It is clear that both the DUP and UUP will work to block the implementation of an Irish Language Act if it is left to the Assembly sitting in Stormont.
Adams said that the Act “has to have at its heart legislative rights for Irish speakers. It needs resources to make this a reality and a commissioner to oversee all that.”
Janet Muller of the umbrella group Pobal described Saturday as “a really historic occasion.
“We wanted to come out and give people the chance to see how strong the community is, how young it is, how lively and positive it is.”
She added that Irish speakers are “an integral part of the community and we would like that to be recognised”.