Assembly election: 'Politics has to be about empowering people' - Adams 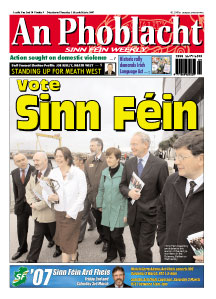 Built like the bow of a great ship, The Point at the Odyssey offers a spectacular view of Belfast’s Lagan River as it makes it’s way out to sea. It’s here that Sinn Féin elected to launch its manifesto, with the heart of the city spreading out to the west and to the east Queens’ island, the hinterland of Harland and Wolfe where once the White Star Line built it’s luxury liners.
“There’s no economic advantage in the Union,” Sinn Féin President Gerry Adams told a packed press conference, “and no reason why the Celtic Tiger should stop at the border.”
The North of Ireland is peripheral to the British economy. “British ministers will never prioritise funding for the Six Counties over their own electoral areas. There’s no votes for them here,” said Adams.
He said that his party’s manifesto was Sinn Féin’s contract with the electorate.
“It is our agenda for government. It contains the pledges we want to take into the heart of fully functioning political institutions”, he said.
“As an all-Ireland party, Sinn Féin is fighting two elections at this time, the undeclared one in the South where this party is an increasingly viable option for voters looking for positive change and this one in the North.
“On the doorsteps there is a clear demand that locally elected politicians face up to our responsibilities. That is also the Sinn Féin position. People of all political persuasions want to see the British Direct Rule Ministers sent home. There is no reason why this should not happen by 26 March”, Adams said.
He went on: “There is an onus on local politicians to deliver on services for the elderly, the vulnerable and disadvantaged. There is a need for an anti-poverty strategy, and for first class health and education services. There is also a duty to oppose the water charges and the unfair rates burden being imposed by British direct Rule Ministers. Sinn Féin is making pledges on all these issues. And we have identified ten commitments for change from our very comprehensive manifesto.
“We also continue to engage with the two governments to secure a substantial peace dividend. We were the first party to put this on the agenda and we will work with the other parties to achieve it. We expect to meet with the British Chancellor in the coming weeks.
“Politics has to be about empowering people. It is about making a positive difference to people’s lives. We take a strategic view about how to accomplish this. For example, at our Ard Fheis last year I set out the objectives for our negotiations. These were:
•   To end the suspension of the political institutions
•   To ensure there would be no dilution of the Good Friday Agreement
•   Full implementation of the outstanding aspects of the Agreement
•   A conclusion to the debate on policing

“The recent Sinn Féin Ard Fheis on policing is proof once again of how Sinn Féin delivers, openly, democratically, in the national interest and in a way that opens up the possibility for more progress.
Another example of how we plan ahead is to be found in our Irish language manifesto in the last election. In that manifesto – Ag Cur Gaeilge Arais i mBeal an Phobail – we promised to bring forward an Irish Language Act. We won that commitment last October from the British government at St. Andrews. And our focus now is in getting the strongest possible Act as quickly as possible.
“On March 7 the voters will have the opportunity to make a judgement on our stewardship of all these issues.
“Others make promises – we make commitments – we keep our commitments.
Sinn Féin delivers strong effective representation in every political forum on this island. We are delivering both locally and nationally. We want to continue this work. We want to confront poverty; sectarianism; racism. We want a rights-based society, where all citizens are treated equally. We are now seeking a mandate to go back into government.
“We are seeking a mandate for this manifesto ‘Delivering for Ireland’s Future’ and for our ten commitments, which range from support for a united Ireland of equals, through support for indigenous small and medium businesses, through rural regeneration, against privatisation of health services, for a suicide prevention strategy, for protection for the environment, and opposition to globalisation and the war in Iraq and Afghanistan.”

2. ECONOMY:
£10 billion 10 year Peace Dividend; Tax Varying Powers for Assembly; Executive Borrowing Facility NOT the Reinvestment and Reform Initiative (RRI) negotiated by Mark Durkan and David Trimble that led to the Water charges; Oppose Water Charges and privatisation – open debate and consultation and ensure that under funding is met by British government; Increase financial support for indigenous small and medium businesses and social economy projects and for Research and Development and island wide networking & clustering to boost innovation.

3. EQUALITY:
Promote equal rights for all. Ring fence percentage of budget to tackle economic inequality and poverty – ensure all resources are targeted on the basis of need; Time framed Strategy to eliminate Child Poverty; Commissioner for Older People.

10. INTERNATIONAL AFFAIRS:
Opposition to the war in Iraq; Support for Peace Processes in the Middle East and Basque Country; Support for debt cancellation and fair trade.