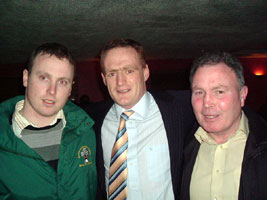 “It is probable that not many republicans met Volunteer Edward O’Brien; still fewer would have known him personally. Yet republicans who have been through a long struggle and who have buried so many friends and comrades who died as he did, do know intimately what motivated him - the core of his political beliefs and the dedication with which he followed them”.

These words were the opening words in a tribute, penned in An Phoblacht at the time of his death, to Volunteer Edward ‘Ed’ O’Brien who was killed on active service in London on 18 February 1996.

The 21-year-old Volunteer from Gorey, County Wexford was the first IRA Volunteer to loose his life on an operation in the aftermath of the Docklands bombing of February 9, that heralded the end of the cessation of military operations ordered by the army leadership in 1994.

If many people had not met, or knew, the young Volunteer at the time of his death then it is clear from the turn out at the function to commemorate Ed held near his native Gorey on Saturday 17 February that his memory will live on for many years to come.

Hundreds of people from across the county, many of them young, turned out to show their solidarity with the O’Brien family.

The Volunteer Ed O’Brien Republican Flute Band, it’s membership made up of many young people from around Gorey, attended and entertained the crowd when the Irish Brigade - who provided the entertainment on the night - took their break.

It is also clear from Saturday night that in the past number of years there has been a resurgence in republicanism in County Wexford.

A county steeped in republican history is at last motivating a new generation of activists and the selfless sacrifice of Volunteer Ed O’Brien is, in no small part, inspiring this new activism.

Also the work of Sinn Féin’s elected representatives, those such as Jimmy Fleming and Anthony Kelly, sent out the message to the people that Sinn Féin is a party of the people.

Then there is John O’Dwyer, the party’s candidate in this May’s Leinster House election.

His speech on Saturday night was truly inspirational.

He reflected on the sacrifice of Ed O’Brien and praised people for their work, support and commitment over the years.

However, the Sinn Féin candidate called on people to be active in the coming months to work and ensure that the party takes a seat in the 5 seater constituency.

He lambasted the other parties and their abysmal records in government.

“They ruled in the interests of profit and big business”, stated O’Dwyer as he reminded his audience that successive governments in Leinster House had resided over the destruction of the Health Service and the education system.

They had watched as companies such as Shell bled the State of it’s natural resources while ordinary working people can’t afford to buy a home.

“Sinn Féin stands against the brown envelope culture”, stressed O’Dwyer to the applause of the huge crowd.

If Saturday night’s function was a public celebration of the life of a young IRA Volunteer who gave his life for the cause of Ireland’s freedom 11years ago then Sunday morning was an altogether different occasion.

I had the privilege of visiting Edward O’Brien’s grave with his family.

It was a private visit and as I stood in that Wexford cemetery I was reminded of the many visits made to those sacred places where our freedom fighters lie.

And though I sympathised with the grief of the O’Brien family I could not shake the words of An Phiarasaigh, at the grave of O’Donavon Rossa from my head, “the fools, the fools, the fools they have left us our Fenian dead and while Ireland holds these graves Ireland unfree shall never be at peace.” It is left to us to fulfil the dream of our patriot dead and win the Republic, the only monument worthy of their sacrifice.