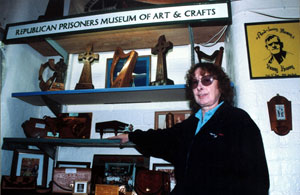 Friday, 2 February 2007, was an important day for Belfast republicans, a day that the dreams of one dedicated, committed and determined republican woman came to fruition with the opening of the Irish Republican History Museum in Conway Mill.

The project to establish the museum was initiated by Eileen Hickey a number of years ago so it was a pity that she wasn’t there to witness the opening. Sadly, Eileen died last year.

It was fitting, therefore, that the official opening of the museum took place on the first anniversary of Eileen’s death. And it was clear from the comments of Eileen’s friends who attended the event that her memory will forever be intertwined with the stories of each of the many exhibits on display.

Those thoughts were echoed by Eileen’s good friend, Fr Des Wilson, who, along with Noelle Ryan, performed the official opening of the museum.

Fr Des described Eileen’s work in the community and her commitment to teaching young people who had left mainstream education and were being taught in the Conway Education Centre.

Eileen’s vision in establishing the museum was, in her own words, “to preserve and promote through art, crafts and artefacts the history of the republican struggle for Irish freedom”. She wanted republican history to be told by republicans and for the museum to be used as a facility for education “so that our youth may understand why republicans fought, died and spent so many years in prison for their beliefs”.

The story of the museum is  just one of the many remarkable stories republicans have to tell. Located in Conway Mill, itself a symbol of the nationalist community and its determination to confront the oppression and discrimination that were the bywords of unionist domination, the room housing the museum was a dilapidated mess. Then Eileen, with her husband Johnny and her brother Patsy. took it over for the museum. With an endless band of workers who gave of their time freely, the space was transformed.

The trio searched high and low for artefacts and their collection grew and grew as former prisoners, priests and republican families from across the city donated or lent items for display.

Among the many exhibits on show at Friday’s opening was an Irish Volunteer uniform dating back to the Home Rule crisis. The uniform came along with a Sam Browne belt, its holster and handgun.

An original memorial card in memory of Padraig Pearse as well as badges and medals honouring the Volunteers of Óglaigh na hÉireann who fought in the 1916 Rising, through the Tan War and into the Civil War are on show.

It should be no surprise, given that the three main people behind the museum were all imprisoned for their republicanism, that the experiences of the many thousands of republican prisoners who passed through British jails over the decades are a central theme of the museum.

Among the many prison-related exhibits are the coat Mairead Farrell wore in Armagh Prison, a cell door and bed from Armagh and a huge selection of harps, crosses and leatherwork made by POWs during their time behind British bars.

Speaking to An Phoblacht, Pól Wilson, who is a member of the museum committee, reiterated Eileen’s wish that the facility be used for education and went on to explain that they wanted the exhibits to tell the whole story of the republican struggle, that she didn’t want it to be seen to represent one group to the exclusion of others.

Pól went on to say that there was space set aside for an interactive learning suite and library which he hoped would be used by young people and schools to learn about the republican struggle.

He finished off by appealing to people to donate or loan items for display in the museum and called on interested groups and individuals to pay a visit.