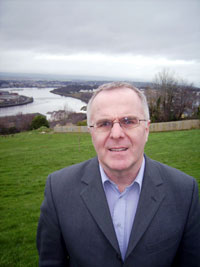 Raymond McCartney, Sinn Féin’s spokesperson on Regional Development, has reiterated the party’s opposition to water charges in the Six Counties but says  he also wants to ensure that people are not misled by those groups advocating non-payment as the most effective form of resistance.

The controversial water charging system is due to come into effect in April.

“Sinn Féin remains totally opposed to the planned ‘phasing in’ of a separate charge for water and sewerage services. We also believe that an essential public service such as the water service is something we all need to protect and retain.”

The Sinn Féin spokesperson, who represented the party on the Programme for Government committee sub-group examining rates and water reform, made an explicit call to households, particularly low-income homes, who will be hardest hit if the charges arrive in April.

“The least-well-off in our society will feel a huge burden with the onset of water charging. Sinn Féin have been vociferous in our condemnation of the use of degrading terms such as ‘rock bottom’, by the new water debt recovery agency, Crystal Alliance, to categorise low-income households .

“I am stating, for the record, that the non-payment option, is a not an option worth taking for those already facing hardship and struggling to manage their homes and families from day-to-day. There may be widespread support for refusing to pay but does anyone really believe that by taking such a stance that the debt recovery company and indeed British direct rulers will not heap more misery and distress on families?

“Whatever the recovery process, it has the same impact, namely to tighten the noose around the most disadvantaged and vulnerable members of our society.

“This issue perhaps is one of the best examples of the need for restored political accountability.

“Sinn Féin have called on all possible alternatives to water charging to be brought forward before an incoming Executive.

“We have given a public commitment to repeal the current legislation upon the return of a local Executive. This is what we will do to address this fiasco.”