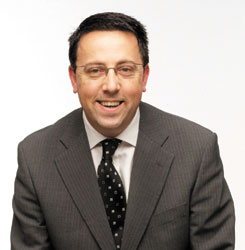 Sinn Féin is being actively excluded from the Joint Policing Committee in the Dublin local authority of Fingal by a Labour/Fine Gael pact.

Sinn Féin Councillor Felix Gallagher says a vital role on the Joint Policing Committee (JPC) has being denied to him by underhand tactics of the two parties on Fingal Council.

Gallagher has been at the forefront of several successful local initiatives to tackle growing levels of crime, anti-social behaviour and drug pushing in one of the capital’s most disadvantaged areas.

The Joint Policing Committee is a pilot scheme that was designed to improve the quality of service from the Garda. It also allows for greater transparency of community policing and aims are to bring a co-ordinated approach to the problems of crime, public disorder and drug abuse.

The unwillingness of councillors from other parties to engage with the community in any meaningful way to tackle crime in areas like Mulhuddart and Corduff will come as no surprise to residents who have endured years of social neglect.

The reasons given for excluding Sinn Féin, according to Councillor Gallagher, are “couched in terminology that simply does not stand up, even to the mildest scrutiny”.

Councillors are only permitted to be on the JPC if they are part of a  “political grouping” but this hasn’t stopped the council from accepting the Progressive Democrats’ sole councillor onto the committee.  Even councillors who have no interest in sitting on the committee are blocking Gallagher’s legitimate appointment.

Sinn Féin has been at the forefront of Fingal’s most effective crime control initiatives such as Community CCTV, which monitors outdoor public spaces such as primary schools, community centres and libraries and acts as a deterrent against drug dealing and anti-social behaviour. Felix Gallagher helped to secure the necessary funding for the scheme, an achievement recognised by Green Party councillors who support the Sinn Féin councillor’s right to sit on the committee.

At the second meeting of the Joint Police Committee, Labour and Fine Gael councillors indulged in DUP-style exclusion tactics.

Cathaoirleach Joe Corr of the Green Party invited Gallagher to table a question to the committee (which the Sinn Féin councillor had submitted three weeks earlier) regarding issues affecting his constituents. But the Garda chief superintendent was instructed by Fine Gael not to address the questions from Gallagher. No other representatives from Mulhuddart even saw fit to attend the meeting.

“This means that one of the country’s worst areas for crime has no representation on the JPC,” said Gallagher.

The Sinn Féin councillor has been at the centre of community policing in the areas around Blanchardstown which have been plagued by drug gangs and anti-social behaviour. As chairperson of the local drugs task force and chairperson of the group which set up the Blanchardstown Policing Forum, Councillor Gallagher said this week that working-class families in these areas have been abandoned and left to their own devices by Fine Gael and Labour.

The sense of urgency regarding Blanchardstown and its environs would seem to be already lost on the JPC.  The latest monthly meeting has been wholly concerned with the beach-front at Malahide.

“I don’t doubt that Malahide may have a problem but in terms of priority it doesn’t come close to what is happening to families and communities in and around Blanchardstown, Mullhudart and Corduff. The situation in these areas should be the priority for the Joint Policing Committee.

“The committee has been severely compromised by the petty party politics of the FG/Labour councillors. The spirit of the Garda Act and the people it was set up to help has been abandoned for entirely selfish reasons.

“It is ironic that, having advocated a change to Sinn Féin policy on policing in the Six Counties so that power over policing could be taken away from the exclusive control of unionist parties, the people of Dublin West find themselves without representation on the Joint Policing Committee.”

Councillor Gallagher is refusing to give up the fight for representation. He has already clocked up the highest attendance record for the committee, albeit from the public gallery.

“I can only hope that councillors will come to their senses and do the right thing to reach a compromise that will bring representation for the people of this city that need it most.”