Justice: Diplock courts must not return by back door 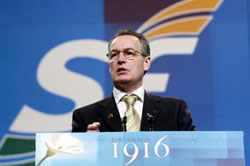 Sinn Féin’s spokesperson on Policing and Justice, Gerry Kelly, has expressed concerns at the draft legislation relating to justice issues which is currently passing through the British parliament. The party met with British Secretary of State Peter Hain earlier this week following a series of meetings with NIO minister Paul Goggins.

Sinn Féin has highlighted four main areas of concern with the Justice and Security (NI) Bill. These include an attempt to place restrictions on the Human Rights Commission; a provision for non-jury trials; and powers of stop and search, raid and arrest envisaged for both the British Army and PSNI.

“We are concerned that aspects of the draft justice legislation may undermine the effect of the repeal of repressive legislation which is scheduled for July this year. Sinn Féin has raised these concerns consistently in discussions with the British Government.”

During negotiations, the British Government committed itself to the repeal of emergency powers as part of the programme of demilitarisation in the Six Counties. This is due in July of this year and includes the abolition of the non-jury Diplock courts.

Provisions currently under consideration at Westminster have the potential to allow the continued use of some emergency powers in particular circumstances. Sinn Féin is also contesting provisions within the bill that would give the Public Prosecution Service discretion to allow a case before the courts to be a non-jury trial.

“There must be no re-introduction of Diplock courts through the back door,” said Kelly.

“Similarly, the provisions that allow extended powers of arrest to the PSNI and the British Army, and those which seek to limit the application of new powers for the Human Rights Commission, should be withdrawn.

“New powers for the Human Rights Commission were agreed as part of the recent negotiations as a necessary step in driving forward the human rights agenda. It is essential that the commission has all the necessary powers to be fully effective.”

The proposed legislation will make it impossible for the Human Rights Commission to investigate retrospective cases even where there are clear implications for the future. Gerry Kelly said: “We made it clear this is a huge mistake.”

The legislation curtails the commission’s right to investigate any alleged abuses the British deem to be “national and security issues” and restricts the commission’s ability to make unscheduled visits to places of detention, including prisons, youth detention facilities and secure hospitals.

These proposed restrictions have been specifically earmarked by the British Government for the North of Ireland.  The new Human Rights Commissions in England, Scotland and Wales will not be restricted. Even more incongruous is the fact that such restrictions are not to be imposed in the 26 Counties.

“It is clear that the transfer of powers is critical to realising the fundamental reform of the criminal justice system and the new beginning to policing envisaged in the Good Friday Agreement.

“Sinn Féin wants this to happen sooner rather than later. The British Government have signalled that, in the event of a refusal by the DUP to agree the transfer of powers in the timescale set out in St Andrews, they will take the necessary steps to ensure this happens. There must be no retreat from this commitment.”