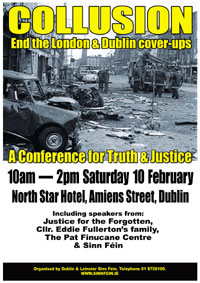 Sinn Féin Justice spokesperson Aengus Ó Snodaigh TD, speaking following a meeting of the party’s Ard Chomhairle in Dublin on Saturday, announced details of a major conference on collusion and truth recovery which will take place in Dublin this weekend.  He said this conference is part of a wider campaign to step up pressure on the British Government and to get to the truth about their role in the deaths of hundreds of Irish citizens.

“Just two weeks ago, the Police Ombudsman in the North confirmed that state agencies had colluded with unionist paramilitaries in killing Irish citizens. The Ombudsman’s report gives us only a snap-shot of collusion in a very small area over a short period of time.   It was only the tip of the iceberg in terms of the British Government’s policy of collusion which was responsible for the deaths of hundreds of people, not just in the North but here in Dublin City, in Dundalk, Monaghan and Donegal,” Ó Snodaigh said.

“The British Government armed, trained and gave information to loyalist death squads for decades. The Dublin and Monaghan bombings were carried out by the Glenane gang, based in Armagh and run by MI5. This gang was a mixture of UDR, RUC and unionist paramilitaries.  They operated with devastating impact for many years.

“There are some, such as Hugh Orde, who think we should draw a line in the sand and put the past behind us.  We absolutely reject that.  The families of those who were killed as a result of British-run death squads deserve the truth.  And this should happen whether it was those killed in the early 1970s in Dundalk, Dublin or Monaghan or those who were killed by British agent Mark Haddock in recent years.