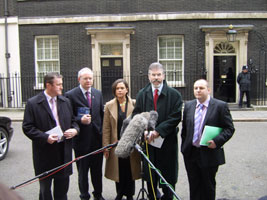 Speaking after the meeting, Adams said:

“We raised the issue of the Irish Language Act with Mr Blair. This is an important issue which needs to be moved ahead. However, the majority of the meeting concentrated on the issue of collusion. I sought this meeting after the recent publication of the Police Ombudsman’s Report into collusion between the Special Branch and the UVF in North Belfast. Collusion was clearly an integral part of British Government policy in Ireland and successive British governments have covered it up.

“I reminded Mr Blair that, 10 years ago, when we first met him in Downing Street, we gave him a file on collusion and in particular the murder of Pat Finucane and the role of British agent Brian Nelson. This morning, I again raised with him the Pat Finucane case. I met with the Finucane family yesterday. They have seen no progress since Weston Park in 2001 when an inquiry was promised and we raised with Mr Blair the issue of Section 19 of the Inquiries Act which would allow for restrictions on the availability of information.

“Conor Murphy, who earlier this week met with Raymond McCord Snr, raised with Mr Blair the desire of the McCord family to meet with him to discuss the implications of the Police Ombudsman’s Report. Conor also raised the activities of the Glenane gang and specifically spoke about the murders of the Reavey family, whose brother we met with last week.

“Padraig MacLochlainn presented Mr Blair with information on the murder of Sinn Féin Councillor Eddie Fullerton in Donegal in 1991 and Mary Lou McDonald presented him with a copy of the Barron Report into the Dublin/Monaghan bombs and other instances of collusion in the 26 Counties. Martin McGuinness raised a number of specific cases with the British Prime Minister, including party councillors John Davey and Bernard O’Hagan and other related collusion cases in South and East Derry.

“We challenged Mr Blair, especially on the role of the DPP. Four years ago, John Stevens sent files on 25 individuals recommending prosecutions at the conclusion of his collusion inquiry. Nothing has happened.

“Mr Blair needs to realise that this issue will not go away. It needs to be properly dealt with. Sinn Féin intend to keep this issue at the top of the political agenda. Families who have suffered, whatever their view of what should be done, all want an acknowledgement of this as a British policy and the hurt caused to their families.”

Dublin MEP Mary Lou McDonald presented Tony Blair with the latest report from the Oireachtas Justice Committee on the Barron Inquiry which describes cross-border attacks by British surrogates as “international terrorism”. This dealt with nine incidents on both sides of the border between 1974 and 1976 in which 18 people were killed and stated that people employed by the British administration were “engaged in the creation of violence and the butchering of innocent victims”. It said the British Cabinet at the time was “aware of the level at which the security forces had been infiltrated by terrorists”.

“The British authorities refused to co-operate in any meaningful way with the Barron inquiries and the Oireachtas Committee hearings despite overwhelming evidence of British state complicity in murders and bombings throughout Ireland.

“I hope this document may help the British Prime Minister to understand that this is an international human rights issue and that the British Government must fulfil its obligations, including to the bereaved and the survivors.

“It is almost a year since the Dáil unanimously passed a motion calling for a full, independent inquiry into the murder of Pat Finucane, yet the British Government still refuses to establish such an inquiry.

“Taoiseach Bertie Ahern has been too quick to accept Tony Blair’s refusal to co-operate with inquiries. It is not enough for the Taoiseach of this state simply to request the British Prime Minister’s help in such matters. He must, on behalf of the Irish people, demand that Tony Blair face his responsibilities in relation to Britian’s dirty war in Ireland.”