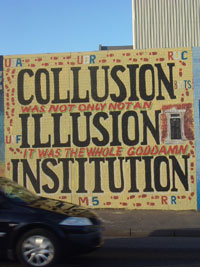 Britain’s dirty war in Ireland achieved a rare official airing last month with the publication of Nuala O’Loan’s investigation into allegations of Special Branch collusion with loyalist killers in North Belfast. Despite the limitations of the investigation, most strikingly the fact that O’Loan can only probe into the workings of one aspect of the collusion mechanism, the report still made dramatic reading.

The Ombudsman’s office may be ring-fenced into the specific remit of investigating what is euphemistically referred to as “wrong-doings of the RUC and PSNI” but its significance outstripped the restrictions of remit and resources. The Stevens Report predates O’Loan but the fact that it remains largely unpublished continues to hinder its contribution.

After 30 years of official cover-up, O’Loan’s report was the proverbial chink in the armour of denial through which the greater truth just may be spied. It was within this context that most republicans and many nationalists viewed the Ombudsman’s investigation into the McCord murder as the ‘tip of the iceberg’.

And, of course, the restrictions of remit and funding do impact adversely upon O’Loan’s report. The most striking distortion is the Ombudsman’s suggestion that the corrosive power of Special Branch on all aspects of policing can be attributed to “a culture of subservience”.

If the Ombudsman’s remit had extended to investigating the wider role of British military intelligence, and their political masters, O’Loan would know Special Branch didn’t gain undue influence – they were given it. The ‘Walker Guidelines’, drawn up by British military intelligence, gave Special Branch operational primacy over all other aspects of policing. Walker was the mechanism through which MI5 controlled the RUC.

As a journalist writing for Scotland’s Sunday Herald, Neil MacKay has a credible record of unravelling collusion stories. He was one of the first to identify the infamous Colonel ‘J’ – the anonymous witness at the trial of UDA killer Brian Nelson and former head of one of Britain’s most secretive army units, the FRU, as Brigadier Gordon Kerr.

Mackay meticulously recorded Kerr’s meteoric career from the ranks of the Gordon Highlanders through to FRU chief, decorated brigadier and Beijing military attaché before dodging the investigation by the Stevens team by getting a posting to Iraq. Kerr’s close associate in the FRU, ‘Captain M’ (named as Margaret Walshall), and implicated in the Finucane murder, also came under MacKay’s scrutiny.

Writing in the wake of O’Loan’s report, MacKay described international opinion as “stunned” by the Ombudsman’s revelations about RUC Special Branch collusion with unionist death squads. But he adds:

“In reality, O’Loan’s findings barely scratched the surface of a 30-year history of criminality and murder orchestrated by the British Army and the Ulster police.” It’s a conclusion with which most republicans and many nationalists would concur. However, the evidence presented by MacKay to support his position is unfortunately too thin. The article relies primarily upon a single, unnamed source, identified only as ‘JB’ and described as recruited and trained by British military intelligence to operate as a “killer, bomber, arsonist and robber” within the UVF.

Don’t get me wrong, MacKay is a good journalist and he’s seen the evidence – “JB passed a bundle of papers to the Sunday Herald, making up the bulk of his unpublished memoirs, which paint British military intelligence as a callous, murderous, criminal cabal”. The problem is, as readers, we are given very little by way of substantiating some very interesting claims.

According to JB, “military intelligence trained, armed and moulded squads of loyalists to put pressure on the IRA”. They were trained as “proxy assassins” in British Army barracks, primarily Palace Barracks near Holywood where they were provided with intelligence on potential targets.

“JB... knows of at least 30 loyalists who received similar training but believes more than 120 could have been trained,” MacKay says.

“JB... trained to use a variety of handguns, machine guns and rifles as well as bomb-making techniques.

“The UVF men working for military intelligence were also given consignments of guns and ammunition by handlers, sent on gruelling fitness courses and schooled in the arts of surveillance, counter-surveillance and intelligence gathering. Other classes included lectures on forensic science, how to avoid leaving incriminating evidence at the scene of crimes and how to steal cars to use in assassination operations.”

JB also describes when loyalist gunmen were “dispatched on a murder operation”, and how British military intelligence would “impose an out-of-bounds order” on the area in which the attack was to take place to allow the killers a clear run to and from the killing.

Little of this is, of course, anything new. All of these claims have been substantiated by other sources. For example, we know about Brian Nelson, an FRU agent within the UDA, and how he and other agents were used by British military intelligence to re-arm, reorganise and redirect loyalist gunmen.

We know the gritty detail of covert arms shipments from the  apartheid South African regime, organised by MI5 and distributed to loyalist gangs. We know about Nelson’s handlers’ involvement in supplying intelligence and the reconnoitre of Pat Finucane’s home. We know that the weapons used to murder him were British Army issue, that the quartermaster who supplied them was a Special Branch agent, William Stobie, and that it was another Special Branch agent, Ken Barrett, who shot him.

The fine detail already in the public domain concerning the murder of Pat Finucane paints a compelling picture of the mechanisms of collusion deployed by Britain in Ireland. In this sense, JB’s revelations offer nothing new about the antics of British agents and the organisations who ran them. But what JB’s testimony does offer is an insight into the British rationale behind the deployment of death squads.

We know that the British justified the creation and deployment of death squads as a means of ‘taking the war to the IRA’. Republicans have pointed out that, regardless of this, once the murder machine was up and running, no one was safe.

JB’s suggests that the murder of civilians wasn’t simply a cover for more-targeted assassinations of Britain’s political and military opponents but, from the outset, the British deliberately engaged in a sectarian war against Northern Catholics.

JB “claims select UVF officers were ordered by military intelligence to carry out assassinations against both IRA figures and ordinary Catholics. Soft targets such as innocent men and women were pin-pointed by military intelligence in order to psychologically undermine the nationalist population and cut the support base from beneath the Provisional IRA,” writes MacKay.

The Catholic population was to be convinced that “support for the Provos will only bring death and destruction to their own community.

“JB also claims military intelligence instructed loyalists to plant explosives in a Catholic bar to make it look like the IRA had accidentally set off a bomb. It was hoped such acts would drain Catholic support for republicans,” says MacKay.

JB puts Bloody Sunday within the context of this strategy and claims the British Army was deployed specifically to inflict civilian casualties on the Civil Rights Movement, ordered by Cabinet “to use whatever force and tactics necessary to put these trouble-makers down”.

If JB’s claims are true then British collusion with unionist death squads wasn’t just about state-commissioned murder, it was also about state-sponsored terrorism. Now there’s a thought.