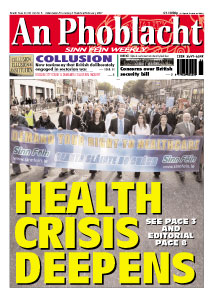 The Department of Health and Children and the Immunisation Office of the Health Service Executive have confirmed to Sinn Féin this week that supplies of the BCG vaccine for babies and young children is seriously low. Families are being turned away from health centres and clinics where supplies have run out.

Ó Caoláin said that the HSE has confirmed the supply shortage, citing the manufacturers as being reponsible. It is expected it will be “at least a couple of weeks” before supply is restored.

“This is an alarming situation. It is imperative that every effort is made to secure the necessary BCG supply without delay. The Minister for Health and Children, Mary Harney, must make a public statement explaining the situation in detail. She must also reassure the many worried parents whose children have been unable to secure their vaciniation.

“The backlog of cases must be addressed as a priority with the restoration of supply.”

Meanwhile, following the statement to an inquest by a leading consultant microbiologist that MRSA is “endemic” in Irish hospitals, Caoimhghín Ó Caoláin said that the government’s approach to the problem lacks urgency.

“The scale of the problem is alarming but that is not matched by appropriate action from the Irish Government. The government lacks urgency in its approach to the MRSA threat to the health of people, not only in Irish hospitals but throughout the community.”

“The problem has been allowed to deteriorate because of overcrowding in our hospitals. This is a direct result of the government’s failure to increase hospital bed capacity by 3,000 as promised.

“Concerted action is required and this includes providing more single rooms and isolation units for those with MRSA.

“The government should establish a state-wide infections directorate on a statutory basis for the inspection, prevention and control of MRSA and other hospital-acquired infections.”