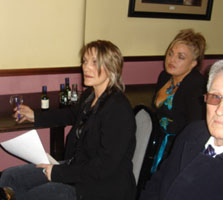 Amanda and Anita Fullerton at the meeting in Urlingford, Co Kilkenny

On Friday last, prior to the launch of PSNI Ombudsman Nuala O’Loan’s report into the activities of Special Branch agent Mark Haddock, a large number of republicans came together in Urlingford, Co Kilkenny. They were there to view a Truth and Collusion presentation, delivered by Bernice Swift, and to hear a daughter of collusion victim Eddie Fullerton talk of the family’s firsthand experience.

Bernice Swift is a member of the Sinn Féin Truth Group and project manager for Fírinne, a Fermanagh-based organisation supporting victims of state violence. This was the first time she had been invited to make the presentation in the 26 Counties. Bernice explained that Fírinne “demands the truth from the British Government on its policy of state-sponsored violence in Ireland and of course collusion is a national issue – there’s the likes of the Eddie Fullerton case, for instance.”

Eddie Fullerton, a Sinn Féin councillor from Donegal, was murdered in his home in May 1991 by the Ulster Defence Association. It emerged later that both the RUC and the Gardaí tried to prevent a key witness from giving evidence.

Eddie was the eldest of John and Mary Fullerton’s 20 children. Born in Donegal in 1935 he, like many others of his generation, left his native country at the early age of seventeen to look for work. He first went to Scotland and soon after to England, where he met his wife Dinah. They would go on to have six children, three of whom – Amanda, Anita and Marina – were at the function in Urlingford, along with Dinah.

Until his tragic death in a car accident last March, Eddie’s son Albert led the family’s fight for exposure of the truth about their father’s killing. Now Amanda Fullerton has taken up the mantle. Speaking to the large gathering, which was sponsored by the Michael Gaughan Cumann, Amanda Fullerton described her father as “a proud Irish man with a passion for republicanism. He cared for people regardless of religion or politics – he loved people and was always out for the common good. He was not a naïve person by any means and was very astute politically, but he cared deeply for people.”

After the function, Amanda told An Phoblacht, “It was loyalist policy in the ‘90s to remove upwardly-mobile Sinn Féiners like my Dad. My parents were in bed that dreadful night in May 1991. There was nobody else in the house. They were asleep for about an hour and a half, to be woken by the sound of hammering at the door. My Dad called out ‘Who is it?’ and went out to the stairs to investigate the noise. Mum said she heard gunshots and then a bit of a silence, then two more shots. She called out to my father, ‘Eddie, are you all right?’ When she went out of the bedroom she saw my father on the landing.” Eddie Fullerton had been shot six times.

On the evidence of collusion in the case, Amanda explained that “a key witness at the time of the murder witnessed suspicious activity in the area the night before and, on learning of the murder, notified the RUC of his suspicions. After he’d reported his suspicions the RUC called to his house, took him to a vehicle in which there was a member of the Garda. He was asked in an intimidating manner if he could recognise any of the people he’d seen the night before. So not only were the RUC aware of the witness’s concerns but so too were the Gardaí. This key information was withheld from us until the witness came to my brother many years later. We were never told about this until the witness came forward to us in 2003. We’ve gone down the legal road with this and we’ve got legal representation and we feel we have a very strong case. In August of last year it was discovered that the guns used in my father’s murder were linked to other killings. Had the police dealt appropriately with the evidence presented by the witness all those years ago, we might have been able to prevent those other killings.”

Asked how she had coped with the brutal killing of the father she so clearly loved, she said, “I’d rather have my father being the man he was – fighting for the just cause he believed – for the short time I had him, than have him with us for a long time as an apathetic man without his passion for justice. I’m proud of the man he was.”

On the Irish Government’s contribution to the Fullertons’ search for the truth, she said: “I was in the Dáil with Albert a number of times. In fact, I was there in June last year when we were received by Caoimhghín Ó Caoláin and Aengus Ó Snodaigh. Then there was a meeting with Bertie Ahern last November, where we gave a forthright presentation of the issues involved. It was a very open discussion. On the advice of the Ombudsman’s office we said we wanted him to put pressure on Tony Blair to urge the authorities in the North to co-operate with the Ombudsman inquiry.”

Speaking again on Monday, in response to the collusion report, Bernice Swift said, “While we welcome the publication of the Ombudsman’s report today, the findings only represent the tip of the iceberg in terms of collusion in Ireland. The report deals with collusion in North Belfast – but collusion took place all across the Six Counties and in the South. The Brits, the RUC and the Gardaí were involved. Though Bertie Ahern expressed his concerns about the revelations in today’s report, that’s not enough. He must now demand a summit with the British Government on this and get to the truth of it all. The Irish Government has been sound asleep on the whole collusion thing and the SDLP were no better, even though they’re now trying to say they were fighting to expose it all along. In reality, the SDLP and the Irish Government have been turning a blind eye.

“The soundings coming from the likes of Hain today try to imply that Nuala O’Loan has exposed a few bad apples in relation to collusion but, in fact, police officers at the highest level were involved and in their thousands. Collusion was clearly part of British policy in Ireland and there’s a need for an independent, international inquiry – international in the sense that Britain was party to collusion in Ireland and therefore cannot be independent.”