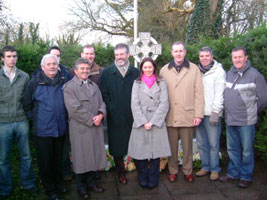 Speaking at the commemoration ceremony Gerry Adams praised Seamus Harvey, his family and all the families of the republican patriot dead. He addressed the current situation, the Ombudsman’s report tomorrow into the killing of Raymond McCord jnr, and the policing debate.

Adams said: “Tomorrow the Omudsman will publish a report into the killing of Raymond McCord jnr.– a  young loyalist killed by the UVF. The report will confirm that collusion was an institutionalised practice involving the old RUC Special Branch, British intelligence, mainly MI5, and the unionist death squads.

“Over the weekend the SDLP leader, in a cynical and most opportunistic effort sought to claim this report for the SDLP. Nonsense! When these killings and hundreds more were taking place the SDLP denied that there was Collusion. Instead, as MI5 was killing our people, the SDLP were telling us that the British were neutral.

“The real credit for the Ombudsman’s report must go to Raymond McCord Snr and his family. They have endured much in pursuit of the truth of their son’s killing.

“But this report is only the tip of the iceberg. And the investigation into the activities of the Special Branch and the UVF in north Belfast is only part of the story of collusion.

“But the truth will out. Here in South Armagh collusion was a central part of British strategy. Their deaths squad were active through this area.

“Their activities extended into Dublin, Dundalk and Monaghan. Scores were killed by gangs of killers involving loyalist death squads, the UDR, the old RUC and MI5 and British military intelligence.

“Sinn Féin is committed to helping the families bereaved by collusion. But the Ombudsman’s report also impacts directly on the debate we will be having next Sunday at our Special Ard Fheis on Policing. This is another reason why republicans must take ownership of the accountability mechanisms we have secured for policing.

Our job is to hold the police to account. Our job is to ensure that no one within policing is able to collude with or run death squads. That is our responsibility.

For republicans the policing debate is probably the most challenging and difficult we have yet faced. But as we discuss among ourselves and with our friends and comrades and community what this means – let us also keep our eye firmly fixed on the big prize – the prize of unity and independence. Because everything we do is about taking us one step closer to that goal.

“Republican strategy today is about building political strength; popularising republican ideas; and mobilising, organising and strategising about how we can best achieve a free, united Ireland.

“One part of this is reaching a new peaceful accord with our unionist neighbours based upon equality. The new Ireland we seek to build has to be inclusive of the new Irish, the immigrants who have come to this island in search of a better life, as well as of unionists. This is the context in which we must approach the issues of policing and justice. Significant progress has been made on key policing and justice issues in this period. The party leadership believe this represents a sustainable basis to deliver a new beginning to policing in the context of our strategic objectives; the full implementation of the Good Friday Agreement; and, moving the struggle closer to our primary aim of Irish independence, self determination, and sovereignty.

Our intention, if the Ard Fheis agrees with the Ard Chomhairle, is to ensure that no police officer ever again does what was done to our people without being held to account.

I believe if we advance together, united behind our republican goals, we will win our freedom and build the united Ireland for which Seamus Harvey and his comrades gave their lives

• The Crossmaglen Sinn Féin Cumann organised a tug of war contest in memory of Seamus Harvey who was a keen sportsman. The event attracted 16 teams to the Crossmaglen Rangers complex. There were men, women and children contests and the keenly contested sporting event attracted huge interest. Pictured here a young trophy winner is congratulated by Gerry Adams, Conor Murphy MP and Arthur Morgan TD.