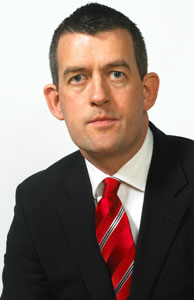 ‘We’re going to make a serious impact in Limerick East’

Sinn Féin general election candidate MAURICE QUINLIVAN (40) is from Ballynanty Beg, a council housing estate in Limerick City. Here he talks to ELLA O’DWYER about his republican background, his political journey, the challenges relevant to his urban constituency of Limerick East, and the value he places on unity within the republican family.

You come from a strong republican background. Can you tell me a little about that and about your own political path?

Both my parents are republican and they in turn come from republican backgrounds.

My mother’s father, Maurice (Mossie) Hickey, was interned in the 1940s. Stephen Kennedy, her maternal grandfather, was the commander of republican forces based in King John’s Castle during the Civil War in 1922.

My father’s parents and uncle were also involved: his father was in the IRA in the 1920s and his mother was in Cumann na mBan at the same time.

My brother, Nessan, was imprisoned in England in the 1990s until he escaped from Brixton Prison in July 1991.

I was 14 when I got involved in Youth Against the H-Blocks in Limerick City and I joined Sinn Féin when I was 18.

I studied Industrial Engineering and Development at college before going to work with a travel agency in London for nine years between 1990 and 1999. I joined the Wolf Tone Society, a Sinn Féin support group, in London, and the prisoner support groups Saoirse and later Fuscailt.

There was a strong republican network in London at the time and we were able to create an important infrastructure to facilitate Sinn Féin delegates travelling to England at the start of the peace process. We’d set up venues for meetings and provide transport and accommodation and the like.

So you were living in London when your brother, Nessan, broke out of Brixton Prison. What was your reaction when you heard the news?

I was totally shocked. My mother and I had been to visit him just the day before. The first I heard of the escape was on the news bulletins. I remember my sister at the time saying she thought she dreamt that Nessan had escaped. Of course, it wasn’t a dream: she’d heard it on the radio while she was waking up!

What about the Special Branch in London? How did they react to Nessan’s escape?

They arrested many of the men in the family and jeopardised their jobs through the arrests and other harassment. In fact, from Nessan’s rearrest in 1993 there was ongoing harassment. In my case, though, it was low-level. They’d watch you and know your movements and every now and then they’d let you know as much.

In 1999, I returned to Limerick to work and I rejoined Sinn Féin in the local Clancy/O’Callaghan Cumann.

In 2004 you stood for the Limerick City Council elections. How successful was the outcome then and what has been the level of party development in Limerick since?

We did very well in the locals in 2004. We made a serious impact and I almost took the seat – against all the pundits’ and media predictions. We got 9 per cent of the vote and I was only eliminated on the last count.

As far back as 2003, Sinn Féin locally identified the need to reorganise. The party then was in a relatively weak state and we began to look ahead and prepare for the 2004 local elections. This was the start of a major rejuvenation of the party here. We’ve built the party to a very significant degree and we’re very active on the ground, gaining new recruits along with drawing on the experience of longer-term members, even people from the 1960s.

The ground is open for us here. We’ve really got our act together and we’ve expanded  in the city over recent years. The media seem to have recognised this too and they contact us regularly for our opinions on various issues.

And what are the key issues for your constituents?

The priorities are health and crime.

Ireland has one of the poorest health services in the world. In every survey on health Ireland comes way down the list. Here in Limerick, as in other counties, there’s the issue of the development of a two-tier health service.

A two-tier healthcare system reinforces the widening gap between rich and poor and leads to high levels of premature deaths amongst people who aren’t so well off, like many families in my constituency.

Drugs-related crime is an issue in Limerick, as in other cities. But the authorities here have opted out when it comes to crime prevention and public safety.

People, particularly the elderly, are living in genuine fear and there’s been an explosion of drugs-related gun crime.

People in private housing have been forced out of their homes through intimidation from drugs-dealing gangs and their houses burned down around them. The government and state agencies have opted out, though they will probably opt back in coming up to the general election.

Limerick City and its surrounds only have a population of 100,000 so the crime rate is disproportionately high. But whatever the rate is, the impact of crime is keenly felt by those on the receiving end.

There’s been at least four shootings already since the New Year and we’re only into mid-January! But then these problems arise in other cities and Limerick is the bogeyman when it comes to negative press. It’s about the only media coverage this city gets at national level – the infamous ‘Stab City’ tag, which we in Limerick deeply resent. The challenges here are substantial but not insurmountable.

So they’re the problems, what about some of the solutions?

Sinn Féin in Limerick have just completed a very comprehensive policy document outlining our proposals for addressing problems related to places like Moyross.

We’re calling, amongst other things, for local employment to be developed in Moyross itself and to that end we’d encourage tax breaks for people wishing to establish business enterprises in the area.

Limerick is a great city but it’s a tale of two cities here, with one part of the city well developed and the other neglected.

What are Sinn Féin’s chances in the general election?

We’re going to make a serious impact in this election. This time round we’ve got a good year-and-a-half’s intensive preparation work done. There’s been a palpable increase in Sinn Féin support in the constituency and the response we’re getting on the ground is very positive.

Out of five seats in Limerick there’s three that are vulnerable so it’s wide open.

What do you do by way of relaxation and what keeps you motivated?

I recently revisited my taste for The Pogues. It reminded me of London in the ‘90s. It could be lonely in London at times but I made great friends, some of whom I’m still in touch with. In fact, a couple of them came over to help me in the 2004 election campaign.

My wife, Sue, is a tremendous support to me and I take strength from my comrades, knowing that we’re all in this struggle together.

Unity is imperative. I come from a county where republicanism was plagued with disunity. We must do whatever it takes to move the struggle forward and do it together while keeping our eye on the ball.