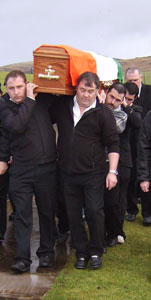 The Donegal Community of  Malin Head and republicans  throughout Derry have been thrown into grief  by the loss of republican stalwart Roddy Doherty who passed away last week after a short illness.  A republican with a history stretching back to the 1940’s Roddy was always active and had played a very positive role in the struggle for the liberation of our country. His commitment to Óglaigh na hÉireann in the North Donegal area during that period was continually tested and proved through hard times when it was not popular to be overtly republican.

Former comrades have described Roddy as a “pillar of strength to all who knew him, extremely reliable and more than willing on many occasions throughout the generations to risk his liberty in prosecuting the republican struggle.

“When required, Roddy assisted Óglaigh na hÉireann with his great knowledge of the greater Donegal area, its geography and people. Held in very high esteem by the Army, Roddy’s advice and judgement was always sought in any given situation and volunteers took Roddy’s advice which always had an impact on the success or failure of any project.  On a few occasions when Roddy was not consulted the project ended in failure”.

As a consequence of their commitment to the republican struggle, Roddy and his family suffered frequent harassment at the hands of the Free State forces, needless to say this did not deter Roddy from continuing his active role on behalf of Óglaigh na hÉireann.  Roddy’s many years as an active republican saw the IRA continually change tactics and strategy through the 50’s and 60’s right through to the present phase, rising in the 1970’s.

Right through all of this Roddy remained committed to the ideals and objectives of Óglaigh na hÉireann –independence for Ireland and a 32 County republic.  Indeed as part of the recent consultation process Roddy took part in a discussion at his home with other republican activists where they were briefed on the latest negotiations and developments,  particularly in relation to policing where he listened intently and engaged in the discussion which ended with Roddy stating “The Strategy made sense”.

Delivering the graveside oration Derry Republican Richie Harkin said: “I feel we have in place a strategy to achieve Irish Independence and build the republic that Roddy dedicated his whole life to.  As we leave this grave of a republican hero let us all re-dedicate our lives and time to assisting the republican struggle in whatever way we can.”

Harkin went on to say that he had a great sense of pride at being given the privilege to address Roddy’s friends and family at the graveside but that privilege was also tinged with sadness at the loss of a good, loyal friend.

“To Roddy’s wife Rosaleen, sons Martin and Michael, daughters Marian and Philomena, grandchildren, the wider Doherty family and his close friends and comrades, the Republican Movement would like to extend our deepest and sincerest sympathy”, he said.