NDP: Crucial issue is around implementation 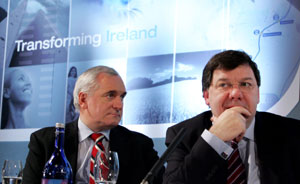 On Tuesday the Irish Government launched a new ‘National Development Plan’ for the 26 counties which is set to run from 2007 to 2013.  Sinn Féin had engaged with the Minister for Finance Brian Cowen to seek a strong all Ireland dimension to the plan.  While Sinn Féin representatives welcomed the significant funding which the Irish Government is committing to spend in the Six Counties, there was disappointment that the plan did not contain more specifics.  Sinn Féin, and indeed many media commentators, have pointed out that  much of the document is a repackaging of previous announcements. As one media commentator put it “there is nothing new jumping off any of the pages in the plan”.  Much of the infrastructural projects have been previously announced as part of Transport 21.

Speaking on Tuesday  Sinn Féin Dáil leader and Finance spokesperson Caoimhghín Ó Caoláin TD said that the plan lacked the imagination and vision for the future implied in the title of the plan Transforming Ireland – A Better Quality of Life for All.  The title was according to Ó Caoláin “highly ironic when you consider that for many people their quality of life has deteriorated significantly during the present government’s time in office. Securing housing has become more difficult. More people are forced to commute previously unimagined distances to work. Traffic congestion is choking our cities.  Access the healthcare is dependent on your ability to pay and on where you live.”

Ó Caoláin went on to point out that many targets in the previous NDP had not been achieved on time or on budget.  He highlighted the abject failure of  the 2000 2006 NDP was to deliver balanced regional development and highlighted the fact that the sprawl of Dublin accelerated during that period while spending actually fell short for the Border, Midlands and Western region.  Clearly in light of previous experience, the crucial issue is around implementation.

One of the most keenly anticipated sections of the new NDP was the section dealing with all Ireland co-operation.   Speaking following its publication Sinn Féin Economy Spokesperson, Mitchel McLaughlin said “Sinn Féin has met with Minister Cowen on the need for an increased focus on cross-border development. Sinn Féin had argued not just for substantial investment in cross-border infrastructure and the integration of economic and social infrastructure but for progress across a range of areas including health and education. Unfortunately some commitments in relation to North-South co-operation are vague, such as the pledge to jointly improve access to health services in border region. Likewise with education.” McLaughlin went on to say: “There are a number of specific projects that both deserve and require an all-Ireland approach in terms of financing and development. This requires not just a commitment from the Irish government but also clear commitments from the British government”.

Caoimhghín Ó Caoláin further criticised the plan saying “In some areas the new NDP does not advance the existing position. It is especially disappointing that in respect of the Ulster Canal it commits only to continue to explore the possibility for its re-opening. There is no commitment to reopen the canal or funding allocated for this purpose. While the plan identifies the Dublin - Derry/Letterkenny route as a key strategic cross border route it does not commit to funding the development of the dual carriageway which has long been sought.”

Sinn Féin also expressed opposition to the continued use of PPPs as proposed under the plan and in particular the fact that 39% of the spending on public transport is to be by way of PPPs.

• Further analysis of the new NDP will be carried in next week’s An Phoblacht.