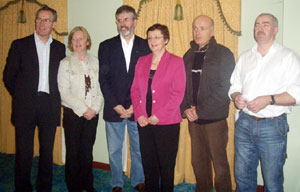 Sinn Féin has been conducting a series of both public and private party meetings over the past week on the subject of policing in the run up to next Sunday’s extraordinary Sinn Féin Ard Fheis. Party Chairperson Mary Lou McDonald said:  “The debate has been rolled out across the party and the broader community. There was a high level of debate with an excellent turn out across the board. We’re facing a very big decision on Sunday and the intensity of the debate within the party and amongst the broader community reflected the seriousness of that decision.

Conor Murphy MP said “The public meetings were all packed out and people took the opportunity to ask questions and make their point. While there were some discordant voices in terms of the policing issue, the mood was very supportive of the leadership. Here in Newry there was massive local interest and from across the political arena. At least half the large audience consisted of people I didn’t recognise even though the meeting hadn’t been advertised. I am satisfied that the public meetings were open and engaging and it’s a reflection of the importance the public place on the policing issue.”

A meeting in Toomebridge, County Antrim on Saturday attended by around 500 people heard concerns by some members of the audience that if Sinn Féin got involved in policing structures it would become part of the state administering British rule. During a two hour debate the Sinn Féin President invited republicans opposed to his party’s strategy for achieving a united Ireland to spell out clearly what they would do to get rid of British rule. Sinn Féin has a strategy to do that  he said, and was building a political party which, with the democratic will of the people, will take power in a united Ireland and bring about the type of socialist republic that we all here want to see.”

A thousand people poured into Galbally Community Centre, County Tyrone on Saturday. Many present had lost loved ones in the conflict, many of them IRA Volunteers killed on active service. There were differences of opinion on the way forward.  The message coming from Galbally, however, is that the republicans of Tyrone and their trusted leadership are at ease with each other and are resolved to continue the struggle together irrespective of the outcome of this weekend’s Ard Fheis.

On Sunday over 400 people from across South Down crammed into the auditorium of Newcastle Centre. The Assembled panel, which included Sinn Féin’s policing and justice spokesperson, Gerry Kelly Bairbre de Brún MEP, south Down MLA’s Caitríona Ruane and Willie Clarke as well as Assembly candidate Cllr Éamann Mac Con Midhe were asked a diverse series of questions on topics that ranged from the future of Diplock Courts to the likely timeframe for the transfer of policing and justice powers. Describing the three hour meeting as “extremely positive”, Ruane said that at this crucial juncture of the peace process, republicans in county Down were overwhelmingly behind the leadership’s strategy.

A crowd of 1,300 people met at the Canal Court Hotel in Newry on Monday.  Conor Murphy MP said the meeting had reflected the depth of interest and feeling that existed on the issue of policing. He added that he like many had left the discussion with a firm sense of unity and confidence in the capabilities of the Sinn Féin leadership in delivering the efficient, effective and accountable Police Service that all were entitled to.

A meeting in Ballyconnell, County Cavan on Tuesday saw around 600 people attend from the border counties of Fermanagh, Cavan, Leitrim and Monaghan.