Policing debate: Youth wing comes up with its own policing model 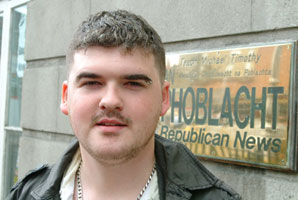 Ógra Shinn Féin National Congress held an extraordinary meeting last weekend to discuss the Sinn Féin Ard Chomhairle initiative on policing. The Congress passed a motion setting out a new model of policing with changes in structure and practice and called on Ógra members to vote against the Ard Chomhairle motion at the Extraordinary Ard Fheis this Sunday.  The Congress urged republicans to remain united and said that they will respect whatever decision is taken by the party’s Ard Fheis next weekend.

Speaking following the meeting, head of Ógra Shinn Féin Barry McColgan said: “The issue of policing is absolutely huge for republican activists, our communities and support base and any decision taken on policing will have wide ranging implications for republicanism as a whole.

“Ógra Shinn Féin’s position from it’s inception since 1997 has always opposed the brutal, sectarian state militia, that passed for a police force in the North.  It was Ógra who spearheaded the ‘Disband the RUC’ campaign, it was Ógra who called on young people not to join in a re-packaged RUC – the PSNI and it was Ógra who last year were shouting from the rooftops, literally, to ‘smash political policing’.

“The motion passed at this weekend’s National Congress sets out a revolutionary new model of policing with radical changes in structure and practice.  It calls for the formation of municipal policing which is locally accountable at district council level, decentralising power away from the state.  It is about decoupling the state from policing.

“It is important that next weekend there is a healthy, comradely debate and that whatever decision is taken that we remain united.”

The youth organisation says that “the PSNI, as currently constituted, do not represent a service that is anywhere near perfect, nor does it have the in-built ability to change to make it adequate to republicans”.

Outlining its case against the PSNI, Ógra says: “The primary functions of the PSNI are twofold; firstly to enforce law and order, and secondly to uphold the six county statelet. At present, the law and order that is being upheld by the PSNI is that of the British state operating in Ireland. Laws passed in Westminster are enforced and enacted in Ireland, a foreign rule of law enforced by a locally recruited militia. However, in a scenario whereby the Six County  assembly is up and running and that all powers are fully devolved, the PSNI would therefore be enforcing laws decided upon by Irish people, in Ireland, representing Irish people. For as long as partition exists, this will remain imperfect, though it does remove the British aspect from the laws being enforced.

“However, the second primary function of the upholding of the statelet remains a barrier to the acceptability of the PSNI. This is the barrier, which is ideological, practical and strategic, that republicans, as revolutionaries, must overcome. We must therefore decide whether we are going to support and endorse a force that actively works against our objectives, or to approach the issue of policing in a progressive way, not limiting ourselves to the staid old model of a monolithic police force.”

Ógra proposes “a municipal police service, answerable to the seven new super councils, that are responsible for the enforcement of civic and criminal law within their areas.

“These new police services would have no role in intelligence gathering, counter insurgency, riot control or any other political type policing other than what constitutes a criminal offence. Overall responsibility for the running and maintenance, in terms of financing and equipping, of the municipal police services would rest with the devolved department for policing and justice. These new police would be responsible for enforcing only those laws that are passed by the devolved administration or the local council that fit the criteria previously outlined.”

A “multi-tiered policing structure within the Six Counties similar to that of many continental countries” would see the PSNI’s “area of responsibility” decline, so “the acceptability of the service increases to the people”.

Using the analogy of the current position of traffic wardens operating in the Six Counties, answerable to local authorities, Ógra says that any negativity towards them “does not come from a political perspective. The laws that they enforce are not in any way politically sensitive and are widely accepted by all. It would be possible to have a service enforcing those laws that are accepted by all decent members of all communities in a just and equal manner.”

The Ógra policing proposals go on to say that: “The all Ireland aspects of the system should be pursued vigorously through the Department of Policing and Justice and justice and policing should be pursued as an area in which a cross border implementation body could operate. This could lead in time to cross border personnel transfer and co-operation between the municipal police forces and the Gardaí. It would also be our preference to see municipal police services operate in the 26 Counties as well.

On recruitment Ógra says it should be carried out initially by the HR department of the new councils in conjunction with the Policing Ombudsman’s office, “until the new structures can deal with its own recruitment with full community confidence”.

“Membership numbers and ratios, be they gender, religious or other, should be determined by agreement between the local council and the Six County policing board. Those wishing to move from the PSNI/RUC or the Gardaí to one of the new services would require a thorough background check by the Ombudsman’s office and approval by the Six County policing board. All members would be required to take an oath to respect human rights, equality, etc. Former POWs will be subject to the same recruitment standards as all other applicants, their previous record shall have no negative effect upon their application.”

Ógra says the new policing services would be held accountable “in much the same way as laid out in the Patton report”.