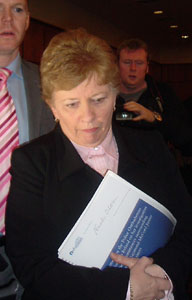 The report this week by Nuala O’Loan, Police Ombudsman in the Six Counties has confirmed the fact that UVF death squads in North Belfast and elsewhere operated virtually as surrogates for RUC officers, and the RUC Special Branch colluded with and covered up for sectarian murderers. The report also found that a bomb attack in Monaghan in 1997 involved collusion.

Sinn Féin has said that the report is but the tip of the iceberg in relation to the extent of collusion that took place between official British forces and unionist paramilitaries over the decades. The party has also called for the immediate sacking of former RUC Chief Constable Ronnie Flanagan who now acts as British ‘HM Chief Inspector of Constabularies’.

Flanagan, who was Chief Constable during the period investigated by the Ombudsman, is in clear denial following the publication of the report. Amazingly he claims not to have witnessed any abuse of suspects in his years in Castlereagh during his time as duty sergeant. He denies the existence of a shoot-to-kill policy in North Armagh during his time heading up HMSU and TSGs and is now denying collusion happened during his time in the Special Branch.

He also denies the allegations that he did not assist Ombudsman fully in her investigations.

On Tuesday Sinn Féin President Gerry Adams spoke by telephone with the British Prime Minister Tony Blair about the implications of the Ombudsman Report. Adams has consistently briefed Blair on the issue since their first meeting in December 1997.

“I once again made the point that this was an administrative practice which was rooted in Whitehall. It was a policy which was about upholding British government involvement in Irish affairs. I told Mr Blair that those involved would have to be removed from the PSNI and that the Ombudsman needed to be properly funded in order to carry out further investigations.

“I also made the point that the British government needed to acknowledge that this was a matter of policy and that it had now stopped and I told him that there needed to be a root and branch reform of the DPP which had covered-up and allowed the perpetrators of collusion to go free. I specifically raised very serious questions over the role of Alistair Frazer the Director of Public Prosecutions”, Adams said.

Collusion goes right to the top

A Sinn Féin delegation led by Chief Negotiator Martin McGuinness MP held urgent talks with the Irish Minister for Foreign Affairs Dermot Ahern in Dundalk on Tuesday about the implications of the Ombudsman report.

Speaking after the meeting McGuinness said: “The report by the Police Ombudsman is I believe the beginning of the process to uncover the full extent of collusion and the involvement of the most senior political figures in the British system in it. Collusion was a British policy, it was about upholding the Union and its result was a campaign of State terrorism in Ireland.

“The former RUC Assistant Chief Constable Raymond White admitted in a Sunday newspaper that British Ministers and senior officials were ‘regularly briefed’ on undercover operations and that he personally had briefed former British Prime Minister Margaret Thatcher. This goes right to the very top.

“I impressed upon the Irish government today that a passive role on this issue is no longer an option for them. They must join with Sinn Féin and the families of those killed and injured through this British policy in demanding that the British government come clean. They must rigorously pursue those instances where the collusion policy directed from Whitehall resulted in attacks in the 26 counties. They must join with us in demanding that any serving members of the PSNI involved in this activity are drummed out of policing.”

“The Taoiseach has repeatedly told the Dáil under questioning from me that there is no necessity for a summit with the British Government on the specific issue of collusion. I would ask him if he can maintain this position in light of the Ombudsman’s report and the growing evidence that collusion between British crown forces and loyalist death squads was widespread, systematic, deadly, and went to the top of RUC command” , he said.

“As Ms O’Loan points out: ‘There is no reason to believe that the findings of this investigation are isolated. Indeed given that many of the failings identified in the course of the investigation were systemic, this is highly likely and the implications of this are very serious.’

“I would also ask the other political parties in the Dáil, who backed the call for an independent inquiry into the murder of Pat Finucane, what they intend to do in the aftermath of this report and for a special Dáil debate on the O’Loan report following the resumption. This report should serve as a wake-up call for those parties in the South who ignored the issue of collusion for decades.”