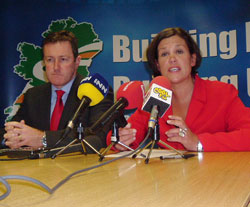 “As we outlined after our Ard Chomhairle meeting last weekend we are committed to conducting a widespread consultation and debate with the republican grassroots in the run up to the special Ard Fheis on 28 January. We’re also committed to holding a series of meetings with the wider republican and nationalist community, including the families of our patriot dead and victims of state murder and collusion”, McDonald said.

She continued: “Part of this will include internal party meetings, bigger republican gatherings and six public meetings beginning this Saturday. The public meetings will be scheduled as follows:

“Ending political and partisan policing and establishing a democratically accountable policing service in the north is a massive challenge for all nationalists and republicans. However achieving such an outcome would be a massive advance. We now believe that engaging in this consultation and debate and holding a special Ard Fheis is the necessary next step.”