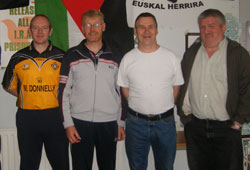 The release of the Castlerea Prisoners

Below we reprint an excerpt from an article published in this week’s Village Magazine in which Sinn Féin President Gerry Adams again calls for the release of the republican prisoners held in Castlerea jail. In Village Adams describes how the Irish Government recently used the emotive issue of these prisoners to avoid explaining their absence from recent political talks.

Because the government raised the issue Adams says he feels it is time to set the record straight, emphasising that he does so in the knowledge of the great grief suffered by the McCabe family and particularly by Mrs. McCabe and expresses his deep sorrow for her loss.

In 2003 there was an agreement by the Irish government that following a positive report by General de Chastelain that the Castlerea prisoners would be immediately released.

Martin McGuinness and I negotiated the Castlerea aspect directly with the Irish government and the Department of Justice.

It was agreed that following the confirmation by General De Chastelain of the IRA putting arms beyond use the four prisoners – Kevin Walsh, Pearse McCauley, Jeremiah Sheehy and Mick O’Neill would be released.

Simultaneously with this Minister McDowell would fly by helicopter to Limerick to inform Garda Jerry McCabe’s widow, Ann.

On 20 October Martin Ferris visited Castlerea Prison where he informed Kevin Walsh of the arrangements. The Prison Governor was aware of these developments. Sinn Féin organised a van to pick up the four prisoners and transport them away from any possible contact with the media.

Despite the fact that republicans kept all of our commitments the Irish government reneged on their commitments.

Almost a year later Sinn Féin was engaged in another round of intense negotiations with the British and Irish governments and the DUP. Once again the issue of the Castlerea prisoners was negotiated.

On 17 September 2004 the Irish government confirmed that in the context of an agreement being reached:

Just over one month later on 27 October the government’s position was given in writing to Sinn Féin. It confirmed that the prisoners would be released in the context of an agreement.

The government also said that no public reference could be made in relation to these matters prior to the Minister informing Mrs. McCabe and Ben O’Sullivan.

Finally, the Taoiseach Bertie Ahern confirmed that the release of the Castlerea prisoners was a part of the negotiations in remarks he made in the Dáil on 1 December 2004.

In response to questions he confirmed that in the context of a comprehensive agreement and republicans keeping to their commitments in that agreement:

“The Government, as part of a comprehensive agreement, would give consideration to the early release of the prisoners, not under the Good Friday Agreement but under the earlier Acts, of which I think two are involved. That is still the position of the Government. I have confirmed this a number of times. I know the difficulties involved and that we would have to engage in discussions with the families, which we would do, and the Garda representative body. It is still an outstanding issue. To be frank and open – this is the place to say it – it is my belief that if we are to have a comprehensive agreement, this is an issue that will have to be part of the final deal. This is not a question on which I want to have ambiguity. If we are to have a comprehensive deal, this matter will be part of it and I would recommend that that be the case. I do not see how we will be able to deal with it otherwise.”