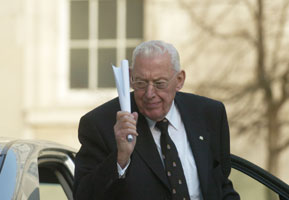 Last Friday Sinn Féin President Gerry Adams revealed that in the run up to the meeting of the Sinn Féin Ard Chomhairle on 29 December the DUP was given the text of the motion he was putting to the Ard Chomhairle calling a special Ard Fheis on policing.

“They said that the required words were in the motion and that if the Ard Chomhairle accepted the motion the DUP would respond to this in Ian Paisley’s New Year statement”, Adams said.

He went on: “The words given to Sinn Féin were: ‘The DUP has always maintained that it will support devolution of policing and justice if there is sufficient confidence across the community. The words needed are those contained in the Ard Chomhairle motion. Provided Sinn Féin translate into action the commitments contained in that motion, the DUP will accept devolution of policing and justice in the timeframe set out in the St. Andrews Agreement or even before that date.’

“This was acceptable to me and I proceeded to the Ard Chomhairle meeting.

“The agreed words were never said which is why there is now a crisis in the process.

“So the context has been changed completely. The DUP have refused to accept power sharing within the St. Andrews timeframe. The basis of the Ard Chomhairle motion has been removed. We have to find another basis to move forward. It will be very difficult but I see this as a challenge to be faced and overcome.

“Despite these very profound difficulties I stand by my remarks of 29 December. I put the motion on policing to the Ard Chomhairle because it was the right thing to do. It is still the right thing to do. Republicans and nationalists, like all other citizens, have the right to a civic, non partisan and accountable policing service. There is still an urgent need to get the power sharing arrangements in place, with the DUP in the Executive as is their entitlement.

“Tomorrow the Ard Chomhairle will have to judge all of these matters in the round. Our objective has to be to find a sustainable way forward.”