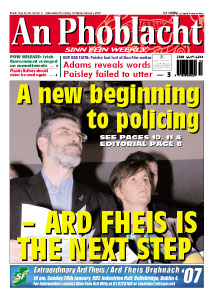 Addressing the media following the meeting at the Great Southern Hotel at Dublin Airport Adams said: “On Thursday, December 28, I said that I believe that Irish republicans need now to take the necessary next step on policing – that it is the right thing to do. This was the position I put to today’s meeting. In response, the Sinn Féin Ard Chomhairle today took the historic and courageous decision to proceed to an Ard Fheis on policing despite the failure of the DUP to respond positively.

“If the Ard Fheis adopts the proposed motion then we will have the potential, for the first time ever, for the full involvement by Irish republicans in policing structures across the island.

“The Ard Chomhairle is proposing that an Extraordinary Ard Fheis adopts this motion and gives the Ard Chomhairle the responsibility and authority to fully implement all elements of it. The necessary context for this is the re-establishment of the political institutions and confirmation that policing and justice powers will be transferred to these institutions or when acceptable new partnership arrangements to implement the Good Friday Agreement are in place.”

Adams said it would be wrong to allow the most negative elements of unionism a veto over efforts to achieve the new beginning to policing promised in the Good Friday Agreement and that Sinn Féin would not be paralysed by such elements.

Adams also said there were those within the PSNI opposed to change and that he had been made aware of incidents in South Derry, Castlederg and Armagh where PSNI units were trying to destabilise nationalist communities. “This is entirely predictable and needs to be stopped”, he said.

“Our objective is to secure a proper policing service and to hold that policing service, once achieved, fully to account. We have already achieved enormous progress on the issues of democratic accountability, human rights protections and the ending of political and repressive policing. Over recent days, we have also seen progress and changes on the key issues of the removal of MI5 from local policing structures and on the use of plastic bullets. I believe that the new beginning to policing promised in the Good Friday Agreement is now within our grasp. Sinn Féin wants to get policing right. The Extraordinary Sinn Féin Ard Fheis is the important next step”, he said.

This Ard Fheis reiterates Sinn Féin’s political commitment to bringing about Irish re-unification and the full integration of political, economic, social and cultural life on the island.

This Ard Fheis supports civic policing through a police service which is representative of the community it serves, free from partisan political control and democratically accountable.

We support fair, impartial and effective delivery of the rule of law.

The changes to policing secured in legislation need to be implemented fully. The truth about wrongdoing by British military, intelligence and policing agencies needs to be uncovered and acknowledged. Sinn Féin supports the demands for this from the families of victims. The PSNI needs to make strenuous efforts to earn the trust and confidence of nationalists and republicans. Gardaí corruption and malpractice – which has been exposed in the Morris Tribunal and the Abbeylara inquiry in the 26 counties – shows the need for constant vigilance and oversight. These inquiries and the ill-treatment of republicans by the Garda Special Branch also provide compelling reasons as to why the responsibility of political parties and representatives should be to hold the police to account in a fair and publicly transparent way.

This Ard Fheis is totally opposed to political, sectarian and repressive policing. The experience of nationalists and republicans in the Six Counties is of a partisan, unionist militia which engaged in harassment, torture, assassination, shoot-to-kill and collusion with death squads.

The British Government have agreed to the transfer of powers on policing and justice away from Westminster to locally-elected political institutions and have set out the departmental model to which these powers will be transferred. In these circumstances authority over policing and justice will lie in Ireland.

We note the British Government’s new policy statement of 10 January 2007 which removes MI5 from policing structures in Ireland. This removes the proposals to embed MI5 into civic policing and removes the danger of again creating a force within a force.

We note also the commitment by PSNI Chief Constable Hugh Orde that plastic bullets will not be used for purposes of public order/crowd control and his acknowledgement of the hurt resulting from injuries and death of innocent people including children.

These weapons should never be used again. Sinn Féin will continue to campaign for a total ban.

This Ard Fheis notes the refusal of the DUP leader Ian Paisley to publicly commit to power-sharing and participation in the all-Ireland political institutions by 26 March 2007.

Before the Ard Chomhairle meeting on 29 December the DUP had agreed words which they would release in response to the Ard Chomhairle accepting the policing motion put by the Party President. We note the DUP’s failure to keep to this commitment.

It is clear that elements of the DUP are determined to use policing and other issues to prevent progress, resist powersharing and equality and oppose any all-Ireland development. This is unacceptable.

It is the responsibility of the two Governments and pro-Agreement parties across the island to resist this and to ensure the full implementation of the Good Friday Agreement.

The responsibility of the police is to defend and uphold the rights of citizens. In order to fulfil this role they require critical support.

Sinn Féin reiterates our support for An Garda Síochána and commits fully to:

To achieve this the Ard Chomhairle is hereby mandated to: