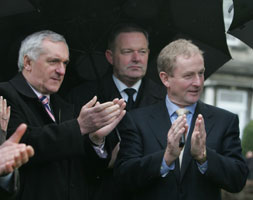 The row between Fine Gael leader Enda Kenny and Fianna Fáil leader Bertie Ahern over whether the latter would accept Sinn Féin votes in the next Dáil in order to form an FF-led government was the opening salvo of the pre-election battle for 2007 in the 26 Counties this week. On Sunday last Bertie Ahern said he did not think it would be reasonable for him to say that he would not take support from a party such as Sinn Féin in the next Dáil. He ruled out any coalition discussions or pacts with Sinn Féin. In response, Fine Gael leader Enda Kenny attacked Ahern and said the Taoiseach was climbing down on his 2005 pledge to go into opposition rather than rely on the Dáil votes of Sinn Féin TDs. A Fianna Fáil/PD Government spokesperson then said Ahern had not changed his position and that Fianna Fáil would not form a government if that could only be done with Sinn Féin backing.

Sinn Féin Dáil leader Caoimhghín Ó Caoláin said the Fine Gael leader’s latest attack “has less to do with Sinn Féin and more to do with Fine Gael trying to rival the PDs in their anti-republican hysteria for electoral purposes”. “Enda Kenny would be better off focussing on his own internal party problems rather than engaging in this hysteria, especially at a crucial time in the peace process”, stated Ó Caoláin.

He continued: “Speculative comment from the leaders of Fianna Fáil and Fine Gael as to Sinn Féin’s role in the post-election arithmetic are equally pre-mature. With the election months away, the only inevitability is that a coalition government of one sort of another, and not necessarily those already on offer, will be elected on the basis of the mandate given to the various parties by the Irish people.

“Sinn Féin’s objective is to maximise the republican vote at the next election and increase our Dáil representation, returning a team committed to a health service free at the point of delivery, an expanded social housing programme to aggressively deal with the housing crisis in this state and preparing for Irish unification. We are confident that we will do so.

“The Taoiseach Bertie Ahern simply stated a fact – that Fianna Fáil would accept the Dáil votes of smaller parties and independents to gain office or to stay in office. Whether any party gets such support from Sinn Féin will be decided by Sinn Féin and by no-one else. Similarly the question of whether Sinn Féin would enter any coalition arrangement after a General Election will be decided by the party membership at a special Ard Fheis.

“Enda Kenny’s hysterical attack on Sinn Féin has less to do with Sinn Féin and more to do with Fine Gael trying to rival the PDs in their anti-republicanism for electoral purposes. Given recent signs of lack of confidence in the Fine Gael leadership’s ability to form a Government, Enda Kenny would be better off focussing on his own internal party problems rather than engaging in this hysteria, especially at a crucial time in the peace process. Enda Kenny’s ill-judged  words will be seized upon by rejectionist unionists as they try to scupper current efforts to achieve progress.”