McGuigan and O'Reilly not to seek nominations 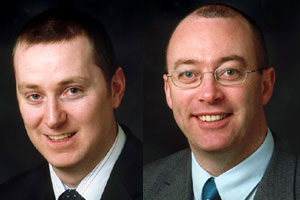 Sinn Féin North Antrim MLA Philip McGuigan is to take up a full-time position within the party and is not seeking to run again as a candidate for the  Six County Assembly. He will, however, remain as a Sinn Féin elected representative on Ballymoney Council.

McGuigan said, “With the introduction of the legislation on dual mandates, those of us currently sitting on both local councils and the Assembly have a decision to make. A vacancy has also arisen within Sinn Féin party management in the Six Counties and, after some considerable thought, I decided to apply to take on this role while maintaining my Council seat.

“Obviously, that leaves me in a position where I have reluctantly decided not to seek re-election to the Assembly at this time. I have enjoyed my time as an MLA, but I now feel that the time is right to pursue this new direction within the party at this challenging time.

“As a local Councillor, I will continue to provide support for whatever party colleague is selected by the organisation here in North Antrim to run for the Assembly, and I am confident that we will continue to increase our support in this constituency in the years to come.

“Given much recent misguided and deliberately misinformed media hype concerning the selection of Sinn Féin candidates, I feel it is important to point out that this decision has nothing whatever to do with current discussions on the policing issue and is purely down to the above reasons. I look forward to continuing to work within Sinn Féin to maximise change and transform society on this island.”

Meanwhile, Sinn Féin Fermanagh and South Tyrone MLA Thomas O’Reilly has announced that he will not seek a nomination to stand in the Assembly election, planned for March. O’Reilly said that he wanted to concentrate on local politics and his role as a member of Fermanagh District Council. He added, “This is the only reason behind my decision and I want to make this clear to avoid any mischief-making by elements of the media hostile to the republican cause.”