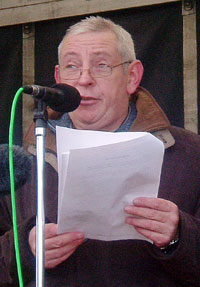 The commemoration march on Monday 1 January 2007, to mark the 50th anniversary of the deaths of Volunteers Seán Sabhat and Feargal O’Hanlon was a remarkable event and the organisers should be proud of their achievements.

Also the thousands of republicans from across Ireland who attended the parade should be commended for making the journey to Fermanagh and ensuring that the memory of two of Ireland’s best known patriots was fittingly marked.

The organisers of Monday’s commemoration left no stone unturned in their efforts to ensure that the event would be a success and to that end they acquired a Bedford lorry, similar to that used on the Brookeborough Raid.

Carrying 14 men armed with replica weapons of the type used by the IRA’s units during ‘50s campaign, the lorry set off from Moane’s Cross followed by the surviving members of the Pearse Column. Family members representing those Volunteers who have since died also attended.

From the banners carried by the marchers it was clear that many had travelled from as far away as Dublin. County Armagh, particularly South Armagh was well represented and many others had come from Derry City, County Derry and County Antrim.

Needless to say the turnout of republicans from across Fermanagh and Monaghan was massive.

The backdrop to the commemoration march was the winding roads of County Fermanagh. Those same roads used by the Volunteers of the Pearse Column in their attacks on the crown forces during the Border Campaign of the late 50s and early 60s.

Fir lined hills rose above the huge crowd as it made it’s way along the banks of the Conneen River from Moanes Cross to the Monument to the two Volunteers at Altawark.

The monument was built from the stones of Keenan’s barn where the two fatally wounded Volunteers died after being shot by the RUC during the attempt to blow up Brookeborough Barracks on 1 January 1957. The barn, itself a memorial to Sabhat and O’Hanlon, was destroyed by the crown forces in early 1985 in a futile act of desperation.

Unable to defeat this generation of republicans the British attacked the memory of two men whose example inspired many republicans by driving an armoured personnel carrier through the walls of the barn demolishing it.

However, in 1996 a group of local republicans came together and vowed to erect a monument in memory of the two dead men and on December 31 that year they put the sandstone memorial in place. It was officially unveiled the following day, the 40th Anniversary of their deaths by Paddy O’Regan and Mick Kelly, veterans of the Pearse Column.

It was at the site of the Monument that the huge crowd gathered for a rally addressed by the Sinn Féin President Gerry Adams.

Wreaths were laid on behalf of Oglaigh na hÉireann, Sinn Féin and the local commemoration committee.

As the rally broke up many people went to view the unique exhibition of memorabilia from the time.

Speaking to An Phoblacht after the rally broke up Brian McCaffrey commended the Feargal O’hAnnluain Seán Sabhat Commemoration Committee saying, “they had done so much to keep the memory of these Volunteers to the fore of the republican family in the area and that their work was not found wanting. That was clear from the massive turnout today, said McCaffrey”.