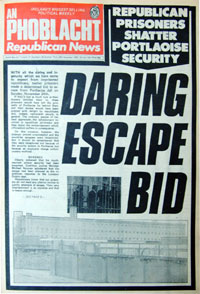 The Portlaoise escape attempt occurred on 24 November 1985 – 21 years ago this week.

In the 1980s Portlaoise Jail in County Laois housed hundreds of republican prisoners. Although there had been previous escapes and escape attempts, the grim jail, guarded as it was by armed troops and major fortifications had a formidable reputation as one of the most secure prisons in Europe. But November 1985 witnessed a daring escape by republican POWs which left them within yards of freedom.

The meticulously planned and cooly executed escape operation began on the morning of Sunday 24 November when prisoners and prison staff were attending Mass in E3 Wing. Twelve republican prisoners gathered on the landing of the wing. One of the prisoners produced a handgun and ordered prison staff not to move. As the men wearing coats over fake warders' uniforms, passed through the first gate it accidentally swung shut, trapping the one armed republican prisoner with the prison officers.

The rest of the would-be escapees moved to re-open the gate but their unfortunate comrade, appreciating how critical time was, selflessly waved them away, thereby giving up his opportunity to escape. Standing guard over the warders he ensured that they would not raise the alarm.

Having discarded their overcoats and using duplicate keys, the escape team quickly opened six further steel gates. Not possessing keys for the last two of the steel doors, the escapees deployed an explosive charge to blow them open. Once through these, there was only a chain-link fencing and gate topped with barbed wire and railings standing between the republicans and freedom.

Capturing several warders at the second last steel door, the prisoners detonated an explosive charge against the lock -- but despite the lock being blown away, the force of the blast buckled the door, jamming it shut.

At this point, although armed, the would-be escapees realised that vital minutes and the initiative had been lost. The O/C of the republican prisoners was informed of the situation and word was passed to the Volunteer who sacrificed his chance to escape, to surrender his weapon. Having accepted their situation the escaped team offered no resistance.

All the prisoners in the jail were then locked in their cells and, at 2.30pm a full scale cell search and strip search started. The prisoners remained locked up until 9.20am on the Monday morning.

At 11am, all the prisoners were ordered out into the exercise yard where they were surrounded by a large force of warders and troops armed with machine guns and high powered hoses. They were kept in the yard without food until 5pm when they were told that they had to go to the basement cells in groups of 12 to be strip-searched again.

At least 60 prisoners were injured during this searching, most suffering cuts and bad bruising, but two men -- Kevin Campbell from Tyrone and Gerard Harte from Lurgan -- were severely beaten and badly hurt.

During the strip-searching the prisoners shoes were taken from them and not returned.On Tuesday, 26 November, the prisoners were again ordered out into the yard and kept there for hours in the freezing cold with no footwear. The shoes were not returned until until Wednesday morning.