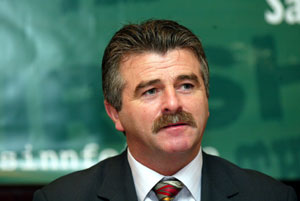 Sinn Féin Local Government spokesperson Arthur Morgan TD has welcomed a government announcement on Tuesday of an extension of two weeks for the public to get onto the new 26 County electoral register. But he said it has to be matched by adequate resources if the tens of thousands of people who have been taken off the register are to get back on.

On Monday Sinn Féin TD for Dublin South West Seán Crowe warned that tens of thousands of people, primarily from working class and disadvantaged areas, have disappeared off the electoral register. He cited West Tallaght as an example, where 6,543 people have disappeared off the Register, over a third of the electorate. He called on the Government to extend the closing date for registration and to ensure lists of deleted voters were publically available.

Responding to Minister Dick Roches announcement on Tuesday of a two-week extension to the deadline for getting on the register Arthur Morgan TD said: "The extension of two weeks for the completion of the electoral register is welcome but it has to be matched by adequate resources if the tens of thousands of people who have been removed from the register are to get back on.

"There are no proactive measures coming from local authorities to get people back on the register and they seem to be depending on political parties and community groups to knock on all the doors and tell people that they have been removed from the register. This is not good enough.

"There is a huge amount of work to be done if the register is to be updated and accurate in the next two weeks and it certainly won't be done if local authorities do not take this issue seriously, put in the resources and proactively get out on the streets and knock on peoples' doors.

"We also need the deletion lists from each local authority to be provided to political parties, community groups and residents' associations to make the process easier. These lists have been held back by some local authorities and Minister Roche needs to instruct local authorities to co-operate with these groups."