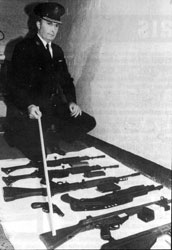 Aspects of the murder of Sinn Féin's Eddie Fullerton are to be investigated by Six-county Ombudsman Nuala O'Loan. Allegations of British collusion in the Donegal killing have never been fully investigated. The Sinn Féin councillor was shot dead in 1991.

The gang used a sledgehammer to smash their way into Fullerton's Buncrana home in the early hours of May 25. Eddie Fullerton was shot dead as he confronted his assailants on the stairs. One of the weapons used in the attack emerged again in the killing of four Catholic workmen in Castlerock.

Shortly after the killing, a number of men dressed in combat gear were picked up by the RUC at Culmore on the outskirts of Derry. The getaway car was discovered burned out in Culmore Point.

In the absence of a properly constituted cross border inquiry, O'Loan can only investigate events north of the border. Speaking to the media Eddie's daughter Amanda said there had been no real investigation North or South into the murder of her father.

"A loyalist death squad travelled over the border, assassinated my father and made their way across the border unobstructed," she said.

The case had originally been referred to the PSNI's Historic Enquires Team. The fact that it has now been passed to the Ombudsman suggests the role of the RUC has come under question.

Meanwhile further evidence of collusion by senior members of the RUC emerged last week. A number of allegations have been made against the late RUC Chief Superintendent Harry Breen. Breen and his RUC colleague Bob Buchanan were shot dead in an IRA ambush in March 1989.

According to former RUC officer John Weir, Breen was present when meetings with unionist paramilitaries took place and collusion was "laughed and joked about".

Weir's testimony was recently authenticated by a panel of international experts investigating British collusion in 76 killings carried out by the notorious Glennane gang in the 1970's.

Weir was a member of the RUC from 1971 to 1980 when he was convicted of the murder of a Catholic shopkeeper, in Ahoghill, Co. Antrim. During his time in the RUC Weir was also a member of the Glennane gang, believed to have been responsible for the Dublin Monaghan bombings and the Miami Showband massacre.

Weir has also implicated a former head of Special Branch, Brian Fitzsimmons, who died in the 1994 Chinook helicopter crash in Scotland. According to Weir, Fitzsimmons was well aware of the extent of RUC collusion with unionist death squads but did nothing to curb it.

A former senior member of the British army has also claimed that his military career in the north was ended after he raised objections to the killing of a Catholic man in County Armagh involving British collusion.

A Lieutenant Colonel in the British army, Nigel Wylde had been in the north of Ireland in the 1970's. According to Wylde a sectarian killing had taken place after the British army passed intelligence details to a unionist death squad. After the killing Wylde raised objections and was transferred within days.

Wylde, an explosives expert, also believes unionist paramilitaries involved in the Dublin Monaghan bombings did not have the capability to make such devices and the most likely source was the British army.