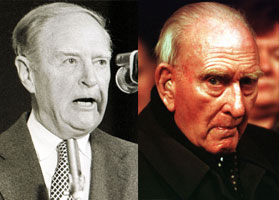 A special edition of Magill magazine was recently included with the Sunday Tribune. It was not available for sale separately so many people will have missed it but it is worth commenting on because of its historical content. Entitled 'Operation Doomsday' it is based on documents 'never before seen in public' and which detail plans drawn up by Catholic clergy in the Six Counties to provide for emergency evacuation and supply of Catholics, mainly in Belfast, in 1974 and 1975 in the event of a massive loyalist pogrom. The clergy were given access to Government ministers and officials in Dublin and so many of the documents consist of Irish Government notes on the affair.

What strikes you most from the documents is the depth of the crisis then engulfing the North and the vulnerability of nationalist districts. Sectarian killings by loyalist paramilitaries were frequent but much worse was feared. The main instigator of the Catholic Church's 'doomsday' plan was Fr. John O'Connor of the Down and Connor Relief Advisory Service (DACRAS). He attended the meetings with Dublin officials and put together plans for emergency accommodation, feeding stations, transport and so on. But there was another purpose behind the plan. An Irish government note of August 1974 states:

"It was understood that the intention of the Church authorities in their approach to the problem was that their preparations would leave no opportunity for the Provisional IRA to organise the protection of the Catholic community and to achieve credit for so doing."

Here was something on which the Catholic hierarchy as sponsors of the plan and the then Fine Gael/Labour Coalition government led by Liam Cosgrave could definitely agree. No matter to them that one of the main factors preventing large-scale loyalist attacks on nationalist areas was the armed presence of the IRA.

The second thing that strikes you is how little the Irish Government was prepared to do to help its clerical friends. The notoriously right-wing Fine Gael Defence Minister Paddy Donegan is recorded at one of the meetings complaining that during previous evacuations from the North - presumably after the loyalist pogrom of 1969 - people were "using the facilities in the South for holiday purposes". The note goes on:

"The Minister also stressed that the people in the North would need to be under no illusion as to the amount of help that it was in our capacity to give in the event of a total breakdown and should set up structures that would rely as far as possible on their own resources up there."

Magill editor Eamon Delaney writes that "it is often said that the Irish state did not do enough for Northern nationalists, but here is proof that it did". Actually the documents prove the opposite. The initiative came from Catholic clerics, not from the Irish Government. It was partly motivated by opposition to republicans but it got very little help from the Cosgrave coalition. This was the Government, after all, that at the very same time was trying to ensure that the hand of British agents in the Dublin-Monaghan bombings would not be exposed.