Hain and NIO civil service to be investigated 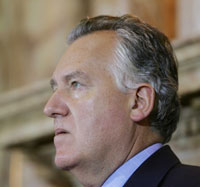 The three most senior members of the British administration in the North -- Secretary of State Peter Hain, NIO Permanent Under Secretary Jonathan Phillips and the head of the civil service Nigel Hamilton have been cited at the centre of the probe.

The case emerged during a judicial review taken by the widow of plastic bullet victim Sean Downes challenging the British Secretary of State's appointment of an RUC widow as interim Victims' Commissioner.

The court ruled that the appointment of Bertha McDougall had been motivated by improper political considerations and did not meet the standards required for public appointments. During the review Hain and NIO officials were castigated by the judge for providing incorrect and misleading information to the court. Judge Girvan called for an immediate inquiry.

Following the review, court papers were referred to the British Attorney General, whose function is to oversee the administration of justice.

"If incorrect and misleading information was deliberately given to put the applicant on a false trail then prima facie that conduct would fall within the concept of perverting the course of justice," said Judge Girvan.

"If, in the course of the substantive judicial review itself, there was a deliberate attempt to mislead the court, the same would be true," said the judge.

Girvan has compiled 67 key questions that need to be addressed by any inquiry. They include questioning who supplied information that was compiled in the letter from the OFMDFM and who decided Bertha McDougall was the best candidate.

A spokesperson for the Attorney General confirmed that a memo had been received from Judge Girvan on Monday 20 November. The Attorney General would "now take steps to inquire into the issues the judge has raised and will announce the terms of the inquiry and who will conduct it as soon as possible".

Commenting on the Attorney General's announcement, Britain's direct ruler in the Six Counties, Peter Hain denied any wrongdoing and welcomed the inquiry.

"I absolutely reject any suggestion that there was a deliberate attempt to mislead the court. I would welcome any decision by the attorney general to hold an inquiry. It will receive our full co-operation," said Hain.

Sinn Féin Spokesperson on Policing and Justice, Gerry Kelly MLA, has challenged Hain to initiate the 'immediate inquiry' ordered by the court into the cover up around his appointment of McDougall and to apologise to victims for the hurt he has caused them.

"Peter Hain's response since the court found against him in this matter shows that not only is he unrepentant about his cynical political misuse of victims' issues, but is contemptuous of any suggestion that he might have something to apologise for.

"The court found that his appointment of Mrs McDougall was a blatant political sop to the DUP and that those involved were fully aware that her appointment would not command cross-community support -- in fact they planned for this.

"Victims across the board have a right to be treated with honesty and respect. For Mr Hain to continue to insist that he was acting on behalf of victims when all the evidence shows otherwise is to compound the hurt his actions have already caused.

"If Peter Hain wants to undo the damage done by this episode he should immediately set up the inquiry demanded by the court, apologise for the hurt he has caused and set himself the task of becoming the first British Secretary of State to take victims' issues seriously by acknowledging his government's role in the recent conflict", Kelly said.