Restoring Institutions : Policing issue must be 'viewed in the round' 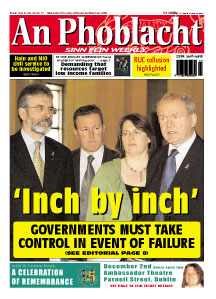 Process moving in the right direction

The Six County Assembly meets at Stormont this Friday. That Assembly meeting will form the next step in the process of restoring the power-sharing and all-Ireland institutions, established under the Good Friday Agreement of 1998. At Friday's Assembly session Sinn Féin will put forward Party Chief Negotiator and former Six County Minister for Education, Martin McGuinness MP, for the position of Deputy First Minister.

Speaking in Belfast on their return Gerry Adams said that he was satisfied that Sinn Féin had kept the British government to the Good Friday Agreement. He said that there has been progress and that the process is moving in the right direction.

"We are satisfied that in the discussions over the last 48 hours we have kept the British government to the fundamentals of the Good Friday Agreement. There has been progress and the process is moving in the right direction, even if it is inching forward. The reality is that a lot of this could happen much more quickly if the necessary political will was shown on all sides. That is what we are pushing for", Adams said.

"A series of meetings of the Programme for Government Committee are due to begin next week and the Assembly is due to be convened on 24 November where parties entitled to do so will put forward their nominees.

"Sinn Féin's focus is on restoring the power-sharing and all-Ireland political institutions so that they can deal with the issues that are impacting adversely on people in their daily lives. I believe we are closer to achieving that this morning than yesterday morning.

"However there remain outstanding issues which must be dealt with by the British government and the DUP", the Sinn Féin President said.

Commenting on the clause on policing which is in the Ministerial pledge Adams said: "From a broadly nationalist and republican perspective there will be a focus on the policing clause in the Ministerial code and the wording put forward by the British in legislation as a concession to the DUP.

"I would ask nationalists and republicans who are obviously concerned at this issue to judge all of this in the round.

"Any pledge for Ministerial position only applies when people become Ministers. That does not arise until 26 March of next year. This provides time for the work which is still ongoing, around the issue of the timetable for the transfer of policing from Westminster and the departmental model, to conclude. And of course any decision Sinn Féin takes on this issue will be a matter for this party."

Speaking last weekend in advance of Monday's meeting of the North's Programme for Government Committee, Sinn Féin Chief Negotiator Martin McGuinness said that there was much work still to be done and he hoped that the long overdue engagement would be genuine and that progress could be made on all of the outstanding issues without unnecessary delay. Nationalists and republicans, he said, would be watching what happened within the committee very carefully.

"Nationalists and republicans won't be unnerved by intemperate language from some within the DUP. People see that the process is edging forward and that more progress can still be made, even in the run up to 24 November when it is expected that myself and Ian Paisley will be put forward by our respective parties.

"What is at stake here is the re-establishment of the power-sharing and all-Ireland institutions and the implementation of the Good Friday Agreement.

On Monday Gerry Adams led a Sinn Féin delegation including the party's Chief Negotiator Martin McGuinness MP and MPs Michelle Gildernew, Gerry Kelly and Conor Murphy in the first meeting of the Programme for Government Committee in Stormont. Speaking afterwards Adams said that a good start had been made by the meeting but added that all of the parties needed to step up the pace and do some serious work in the coming weeks in order to resolve the outstanding issues. The Programme for Government Committee is to meet again next week.

"Today's convening of the Programme for Government Committee is welcome and a good start was made. We now need to step up the pace. There is a huge amount of work to be done in a relatively short period of time and we will only succeed if everyone comes at this in a genuine spirit", Adams said after the meeting.

"At today's meeting we proposed that the Programme for Government Committee meet with the Minister for Finance Brian Cowen and the British Chancellor Gordon Brown to discuss in detail the proposals for a significant Peace Dividend to be used by a future Executive. We also called for the proposed legislation on Water Rates, due to be debated next week in the British House of Commons, to be deferred.

"There are many other issues which this Committee needs to address. One of the most important is cross party agreement on the timetable and departmental model for the transfer of power on policing and justice away from Westminster to political institutions on the island of Ireland", said the Sinn Féin President.

"People across the island, nationalist and unionist, will be following the work of this committee carefully. Sinn Féin intends to engage fully with all of the parties, including the DUP, to resolve all of the outstanding issues.

Our focus is on getting the power-sharing and all-Ireland institutions up and running as quickly as possible and delivering for the people who elect us", he said.