CIE needs a hike in investment not fares 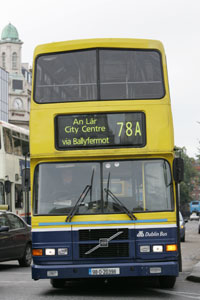 CIE has applied for a range of price increases that will mean significant hikes in fares for 26-County rail and bus users in the New Year. If sanctioned this week by coalition transport minister Martin Cullen, the rises will mean another drain on household income in 2007 as many families already have to accommodate a 34% rise in gas prices, a 20% increase in ESB charges in January, not to mention five increases in mortgage interest rates during 2006 and a 12.5% hike in VHI premiums.

Now the 26 County transport services which moves hundreds of thousands of workers and school children to and from home every day is to add to the cost drain facing households.

The 9% rise is needed according to CIE to cover increased wage costs and rising fuel process, 6% is for non fuel cost increases while 3% of the proposed hike is to cover high oil prices. With 26-County inflation running at 3.9% the 9% being sought by CIE is more than double average price rises. In 2005 CIE management had sought a 7.5% fare increase but Martin Cullen would only sanction a 3.8% rise.

The now annual speculation over bus and rail fares only highlights another gap in coalition government transport policy. With the Government spending over €3 million daily on roads, it seems that they are giving little thought to the idea of developing public transport facilities on these roads and rail investment is falling once again after a peak in 2003.

At first glance these look like impressive figures until you realise that most of the CIE investment is in the rail network that was starved of funding for decades like so many other parts of 26-County public infrastructure, and the increased investment of recent years is making slow progress in improving seriously overcrowded and unreliable rail services. €1.4 billion had been invested by the end of 2005 in refurbishing Iarnrod Eireann, a lot of this spending was on track safety and modernising signalling, so there was little service improvement visible from the investment.

Dublin Bus had to get special ministerial permission during the year for making additions to its fleet and the proposed fare rises will do nothing to add more buses, or better more comfortable transport for the city's travellers.

The annual costs of running Dublin Bus are subsidised by the government to the tune of €65 million, which at 26% of annual expenditure makes it one of the least subsidised urban transport services in Europe and this €65 million helped carry 146 million passengers in 2005, this is a subsidy of 44 cent a journey.

CIE will probably get its price rise in coming weeks, rail and bus customers though will get the same under funded services and CIE workers will be condemned to another stressful year of stretching resources to meet growing passenger demand.