Decision by Taoiseach to meet Fullerton family is welcomed 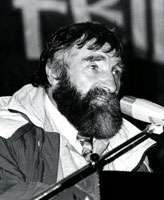 The Taoiseach's decision to meet the Fullertons comes after intensive campaigning by the family and by Sinn Féin during the past decade for a full, independent, public inquiry into the collusion between unionist paramilitaries and state forces before, during and after the 1991 murder.

Sinn Féin again raised the demand for the Taoiseach to meet the Fullerton family during last month's St Andrew's negotiations - a demand the Taoiseach has now finally accepted.

Councillor Mac Lochlainn described the proposed meeting as "a hopeful sign that the Government is now prepared to address the Fullerton family's demand for truth and justice".

"The Fullerton family have demonstrated remarkable courage and huge dignity during the past fifteen years. Despite the deep hurt caused to the family by the dismissive attitudes of state authorities during that period, the Taoiseach's decision to meet the Fullertons this week is to be welcomed.

"It is vitally important that this meeting at the highest level is simply the first stage in further progressive and productive Government action on Eddie Fullerton's case.

"There is overwhelming and disturbing evidence of collusion between state forces and the unionist paramilitaries who murdered Eddie. It is a testimony to the diligence and determination of the Fullerton family that Sinn Féin succeeded in gaining cross-party support for a new independent public inquiry at Donegal County Council last year.

"It is clear from the chilling new report issued by the Derry-based Pat Finucane Centre last week that collusion was an official British Government policy in Ireland.

"The Irish Government now has a moral and constitutional responsibility to finally and fully address the brutal legacy of the British Government's collusion policy, particular in the murder of Eddie Fullerton - an elected and highly respected Buncrana Councillor assassinated in his own family home", Mac Lochlainn said.