'To be successful you have to be daring' 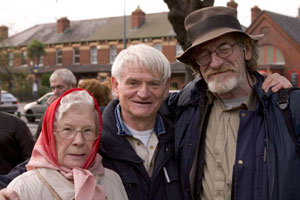 Former political prisoner Jim Monaghan delivered the oration last weekend at the commemoration in Dublin to honour Seán Russell, Chief of Staff of the IRA in 1938 who died from a perforated ulcer, 100 miles off the Galway coast, on 14 August 1940, on a German U-boat.

Frank Ryan, the legendary socialist republican and former IRA man who had been captured fighting for the International Brigade in the Spanish Civil War, was on the U-boat with Russell. Russell was buried at sea and the planned landing aborted.

Russell, an IRA Volunteer in 1916, had been in Germany seeking aid for the IRA.  Because of this, the Russell commemoration has been the target of opportunistic politicking by Fianna Fáil MEP Eoin Ryan and reactionaries who argue that Russell's attempts to acquire arms from Germany makes him a Nazi sympathiser, even though Russell had also sought weapons from the USA and the Soviet Union.

Aside from there being no actual evidence to support allegations that Russell was a Nazi, testimony by Nuremburg War Crimes Trial witness Erwin Lahousen, who had been a key figure in an a failed pre-war plot to assassinate Hitler, said that Russell had insisted he was not a Nazi, completely disagreed with Nazi philosophy, and had blasted their attempts to convert him. Lahousen said the republican leader wanted help to achieve independence but stressed there must be no strings attached.

"This was like a re-run of 1916 when Irish rebels got guns from Germany while it was at war with England; Russell was no more an admirer of Hitler than the leaders of 1916 were admirers of the Kaiser. England's difficulty was Ireland's opportunity."

"Our problem with policing is that the RUC was a unionist militia and it was the eyes and ears of British colonialism. It was deeply implicated in murder and collusion with unionist death squads under the cover of the UDA and UVF.

"The RUC was an instrument of intimidation and harassment of the nationalist community. It is gone now, replaced by a PSNI that still has many of the old RUC in it who share the RUC ethos of repression and murder. It's no wonder republicans have problems."

Jim Monaghan acknowledged that there are serious concerns over the issue of policing and that some might argue that the safe option is to walk away from any involvement in policing. But he drew on his long experience as an IRA activist to pose a challenge to those who advocate 'playing safe'.

"Any of you who have seen active service with the IRA know that you think of a hundred things that could go wrong but that nothing much is achieved by playing it safe.

"To get a good result, you have to go for something daring. You have to overcome your doubts and fears and trust your friends and comrades and go for it!"

The clandestine activities of agencies such as MI5 are still an issue, Jim Monaghan said, but if control of policing is taken away from Downing Street and given to a power-sharing administration in Ireland it will lessen the ability of the police to be a unionist militia. The PSNI will have to operate in the open and be accountable.