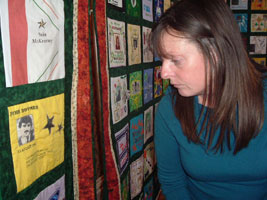 The court called for a high level inquiry into Hain's handling of the appointment. The judge also referred to "evasive and misleading" information, accusing the British minister of attempting to frustrate the case by withholding material evidence and highlighted NIO civil service complicity.

Girven upheld an application for judicial review by Brenda Downes, a West Belfast woman whose husband Sean was killed by the RUC.  Downes died after he was shot in the chest at close range by a plastic bullet in 1984.

Emerging from the hearing, Brenda Downes said the ruling had been a victory for justice. "Right has overcome might. Justice has prevailed", she said. The court ruled Brenda Downes was a victim of unlawful discrimination under equality legislation enshrined in the wake of the Good Friday Agreement.

Mark Thompson of Relatives for Justice said the judgement gave ownership of the process back to victims.

Sinn Féin MLA Philip McGuigan said if victims of the conflict are to have confidence in a commissioner then people have to be confident that the appointment was free from political intervention and not part of a wider game being played by the NIO.

The court upheld the applicant's contention that Peter Hain's decision to appoint McDougall was motivated by an 'improper political purpose'.

Hain had failed to take account of the fact that there was no evidential basis for concluding there would be cross community support for the appointment of an RUC widow to the post.

Hain's decision was in breach of the accepted merit norms applicable to public appointments and the judge ordered the British Secretary of State to pay court costs of around £100,000.

"This case raises very serious issues which should be the subject of an immediate and searching inquiry at the highest level," said Judge Girvan.

The judge cited civil service spin that had sought to cover up the improper actions of the British Secretary of State in making the appointment. NIO civil servants had avoided answering the question of how Bertha McDougall had come to be aware of the vacancy and they had given a wholly misleading impression that senior officials had put her name of the list and that no consultation had taken place.

Girvan concluded that Hain had been motivated by political considerations in deciding not to carry out a proper procedure to identify the best candidate. "This leads to the conclusion that he acted for an improper motive," he said.

The judge also said civil servants attempted to cover up the improper behaviour of the British minister.

NIO officials had given the false impression that the appointment had been made on the basis of best candidate in terms of merit when in fact the ordinary principles applicable to the appointment solely on merit were disregarded.