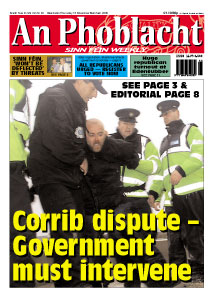 Battering and bullying in Bellanaboy

In an exhibition of 'in your face' brutality Gardaí last Friday, 10 November launched a reckless assault on peaceful protestors near the site of Shell's controversial Corrib gas pipeline at Bellanaboy in County Mayo - and in the full glare of the national media.

In response to the day's violence Sinn Féin Spokesperson on Natural Resources, Martin Ferris TD criticised the manner in which the Gardaí policed the protest which saw the hospitalisation of one protestor. The Kerry North TD said: "This is only the latest instance of heavy handed intervention by Gardaí at Bellanaboy, something that has already resulted in injuries and numerous complaints against individual members of the force identified only by badge number. The protestors are perfectly entitled to be there and indeed non-violent direct action has now become the only option for those with legitimate objections to the gas pipeline as all other avenues have been closed off to them.

"This culminated earlier in the week with the dismissive attitude of Minister Noel Dempsey to proposals from the Shell to Sea campaign. The Minister of course did find time to solicit multinationals in the Burlington Hotel who might be interested in taking further advantage of Ireland's natural resources, promising them that any gas they get their hands on can be piped directly out of the country.

"Last weekend Fianna Fáil made much at the Ard Fheis of their increasingly tired historical claim to be a republican party. Sadly, Minister Dempsey's attitude reminds one more of the yeomen, land agents and bailiffs who did the dirty work of the landlords in Mayo and elsewhere during the Land War."

The violent and shocking performance of the Gardaí on the day was well documented on television. One eye witness account brings home the level of brutality inflicted on the protestors, Michael Nolan a Sinn Féin party member and employee who works at Leinster House.

Speaking to An Phoblacht this week Nolan described his ordeal at the hands of Gardaí in Bellanaboy: "I was grabbed and pulled to the ground by a guard who was quickly joined by two others. At this point I was on the ground and was being kicked and punched by three guards. I am not sure how long this went on but I was then dragged to my feet with one guard squeezing my throat while the others continued to kick and punch me. I was then swung around and brought behind the van. The kicks and punches continued but also at this point my arms were straightened and brought up behind my back so as to make me bend over and to prevent me from protecting my face. One guard kept me in a headlock and then punched me in the face several times and then grabbed my nose and started to twist and pull at it. Then I heard this same guard say 'ease off...ease off...civilians lads...ease off'.

"For a moment the kicks and punches stopped and a car passed in front of me.   I called out for help.  Blood was coming from my nose and my right eye was starting to swell up. The car passed and the same guard then said, 'Give him more pain...more pain'."

One of the other protesters called an ambulance and the protestor was placed in a collar and taken to hospital. Thirty protestors were injured.

Fine Gael leader and Mayo man Enda Kenny who until now has been conspicuously silent and inactive on the pipeline controversy raging in his constituency blamed "outside forces" on the violence which took place. In response protestors have asked whether the Fine Gael leader was referring to hundreds of Gardaí drafted in from outside the area to attack protestors including many local people.

The Taoiseach's response to the Garda onslaught  reinforced the aggression shown in Bellanaboy: "The negotiations are over. The work goes on. If there are those who try to frustrate that, they are breaking the law and it is a matter for the Gardaí to enforce that", said Ahern.

In a desperate yet typical diversionary tactic, Justice  Minister Michael McDowell, referring to the disturbances in Mayo attempted to blamed republicans: "Provo tactics won't work. I want the Provos to understand that, at every level."

Responding to McDowell's ludicrous comments Sinn Féin Dáil leader Caoimhghín Ó Caoláin said: "Tánaiste and Justice Minister Michael McDowell's disgraceful comments this morning are scare tactics designed to deceive the public. The campaign at Bellanaboy is community-led and community-driven and has won widespread active support from people of all political parties and none. To try to portray that campaign and this morning's protest as being orchestrated by Gerry Adams, Martin McGuinness and myself is absurd.

"Sinn Féin has been proud to take our place in support of the people of North West Mayo in opposition to this pipeline. We have backed the Shell to Sea campaign's demand for the refinery to be offshore. And for many years we have highlighted the disgraceful giveaway of our natural gas and oil resources to multinationals by successive governments, including the present Fianna Fáil/PD Coalition in which Deputy McDowell is Tánaiste.

"Minister McDowell's sudden and new-found interest in the Rossport issue comes now because he sees it as yet another opportunity to have a go at Sinn Féin. His comments should be treated with the contempt they deserve."

Speaking in Leinster House on Tuesday, Sinn Féin Justice spokesperson Aengus Ó Snodaigh TD called for members of the Gardaí who engaged in brutality against civilians in Mayo the previous Friday to be held to account. Ó Snodaigh said peaceful protesters at Bellanaboy, Greencastle and Bangor "were battered and assaulted by members of the force."

Almost six million euro has been spent on Garda overtime since early October and more than 200 Gardaí are on constant standby in Mayo at a cost of €135,000 a day - money that many people point out could be directed towards the provision of services in the area rather than deployed in an attempt to batter the community into submission.