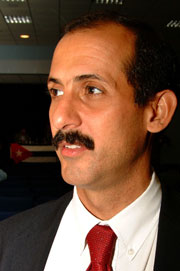 Everything depends on political will

In the second of a two-part interview, Cuban ambassador to Ireland, Noel Carrillo speaks to An Phoblacht's INAKI IRIGOIEN about the Cuban health system, the Irish Hunger Strike and the peace process here.

Asked about the key to the phenomenally successful health system in Cuba, Noel Carrillo says: "I think everything depends on political will, and secondly, although we may not have as elegant and beautiful health clinics as you have in Europe, we have a very simple system that is based on preventive policy. We have a doctor for every 120 people. This is a family doctor that lives in the neighbourhood and they and their family, live over the surgery. Most people will get well with this medical care, as the doctors will know well their patients and their needs. Obviously, to have all these doctors required a huge inversion. After the revolution, we had 3,000 doctors in the country. Now we have 60,000 doctors in Cuba, 25,000 of them working in Third World countries and we are still training a lot of doctors every year.

"Then we have a secondary health system, the poli-clinics, in every neighbourhood, and then, the specialised hospitals. We are trying to spend the money in the most rational way - prevention of diseases is cheaper than to cure someone that is sick. Because we consider health care a human right, health care is free, including dental treatment, and even some cosmetic surgery.

"There is a lack of some equipment and medicines, because of the blockade. On some occasions we have to buy the drugs required for certain treatments through third countries, and we have to buy it under a different name, not as the Cuban state, because the US policy forbids drugs produced in the US coming to Cuba.

"We have doctors in Africa, Latin America and some Asian countries. The US State Department has recently introduced legislation allowing those Cuban doctors that approach a US embassy in a third country to be allowed to go into the US. They are trying to damage our solidarity with the Third World. The good news is that doctors are not availing of this 'opportunity'.

"We are working with other Latin American countries, namely Venezuela and Bolivia, to improve healthcare in the region. We are working together in a programme called ALBA for the social integration of the Americas, and one of the aspects is to treat a million sufferers of cataracts in the next ten years. So hospitals are being built throughout Latin America. However, the companies selling equipment to Cuba are being threatened by the US administration with a ban on trade in US markets.

Carrillo explains that as a consequence of Hurricane Mitch, 1,000 Cuban doctors went to Central America to help the population.

"We realised that there are doctors in the main Central American countries, where people can afford it, but none in rural areas. Those who study medicine in Europe or the US, they do not go back to their countries, because they are better paid in developed countries. We realised it would not be possible to maintain a system of co-operation only based on Cuban doctors, even if we wanted. To create a sustainable policy, we decided to train local doctors from poor areas and poor families, so we built in Cuba the Latin America School of Medicine. Last year, the first 6,000 doctors from Africa, Asia and Latin America graduated. There are students everywhere in Cuba and we are also training doctors in their own countries, ie in Mali and Venezuela.

Similarly, we are running literacy programmes in many countries, based on audio visual methods. We tried this in Venezuela a few years ago, even is some indigenous languages, and many countries have recognised the programme's success. This is the kind of integration that ALBA supports."

ALBA was signed by Venezuela, Bolivia and Cuba, but it is already having effect in some other countries.

"We have hospitals in Bolivia near the border with Perú and Argentina and patients from these two countries travel to Bolivia for treatment. Before, we used to take these people to Cuba, but it was very expensive. Now we want to be more economically efficient. I want to insist - this is not trade co-operation, we are not exporting doctors and we are not getting paid for training these doctors, who as students get a very small allowance and live with Cuban families.

"From an economic point of view, ALBA will compensate the needs of every country. For example, Bolivia was selling soya beans to a neighbouring country but because this country signed a free trade agreement with the US, they are not allowed to buy Bolivian soy anymore. We need soy beans, so we are buying now from Bolivia, and we are selling them things they do not have. Sometimes there is no money involved in the transaction - we exchange one product for another. This is the kind of integration we were dreaming of and we are building today.

In 1981 Cuba's Fidel Castro praised the courage and self-sacrifice of the Irish Hunger Strikers and there is a monument in Cuba to their memory. Asked whether there is a wider awareness in Cuban society of the Irish struggle for unity and independence and what Cubans know of the Irish peace process, Carrillo responded:

Although Cuba is not a Catholic country, we have a Christian background and this is why life is so important to Cubans. When the Hunger Strikers gave their life for their cause it was a wake up call for Cuban society. We got to know the problem in the North through this Hunger Strike, it affected a whole generation of Cubans and, as a result of Fidel Castro's comments, it touched the souls of so many Cubans.

We have been paying attention to the conflict in the North and we see the Good Friday Agreement as a big opportunity for the resolution of the situation. Ireland as a whole may find a way to solve the problem and to eliminate confrontation and the impact of the conflict on the population in the North.

"We fully support the Agreement and we keep in our memory the sacrifice made by the Hunger Strikers and we feel that what they did opened the way to the agreement of today.

"This is an internal matter, of course, but we believe that the only way to solve this situation is by taking into account the interests and opinions of all sides. This is why we are very impressed by the advances in St. Andrews and we hope this is the beginning of the end of the impasse in the process."
An Phoblacht
44 Parnell Sq.
Dublin 1
Ireland