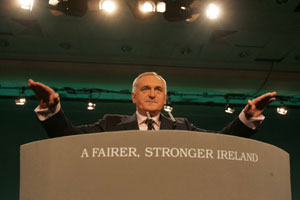 Knifings, assassinations, attacks, sinister set ups, battlefields, jihads and attempts at live burials - it was all blood and gore at the Fianna Fáil ard fheis in City West last weekend as Fianna Fáil put the finishing touches to their 2007 election platform.

The new message is that they are promising a "fairer stronger Ireland", which when you consider that Fianna Fáil are now in their tenth consecutive year of government is quite a claim and begs the question as to what have they done to bring about a fairer 26 Counties up until now! But this was not the spirit of the weekend, Fianna Fáil is not really in government, they are set to begin next May.

As Bertie Ahern said himself in his presidential leader's address: "We are not here to focus on the past but to plan for the future", a theme taken up by Communications Minister Noel Demspey who told delegates that, "In all areas of government we are preparing for the future".

In truth there were three themes to the Fianna Fáil Ard Fheis, one was the looking to the future, the second was allowing a sneaky look back only to focus on tax cuts, and then there was the centre piece of the weekend and the coming election campaign, it was and is Bertie.

It was Noel Demspey who called us to the "battlefield" of "policies, stability and leadership" not "character assassinations disguised as honesty". It was Finance Minister Brian Cowen who took up the baton to proclaim that Ahern, was "noble", "astute and brilliant" and the "consummate politician of his generation". It was fitting then that delegates had T-shirts with Ahern's persona in the now famous Andy Warhol style previously reserved for other revolutionaries such as Che Guevara. Are we really expected to believe that Ahern should be as exalted, well in City West last weekend it seemed that the answer was yes?

It was Ahern himself in a post leadership speech TV interview who spoke candidly not of policy or new strategies but of his own personal trials and tribulations. People were out to "bury him"; there was a sinister "calculated set up" but have no fear as Ahern told us that though it was a difficult few weeks, "it's important just to keep doing your job to the best of your ability and hope that the public understand that you can't be perfect all the time".

This is the sub theme of the Fianna Fáil strategy, they want you to believe that though Ahern has his flaws there is no one in the opposition who can match his leadership ability.

Arts, Sports and Tourism minister John O'Donoghue attacked Enda Kenny and Pat Rabbitte who had tried to 'knife the Taoiseach in the back'. Kenny and Rabbitte were the Podge and Rodge of Irish politics, locked in a cycle of begrudgery and they would take us back to the dark 1980s. O'Donoghue seemed to forget that Fianna Fáil were in power for half of that decade!

The threat of a jihad came from the Green Party according to Environment Minister Dick Roche. The Greens, he said, "were the jihadists of the environmental movement" and went on to attack Rat Rabbitte saying his heart was in Pyongyang and that the Labour Party wanted to drag us back to the 1970s, a decade where Fianna Fáil were in power for six years!

The one party not mentioned in the Fianna Fail diatribe was Sinn Féin, possibly because Ahern and Fianna Fáil have taken a deliberate strategy of name calling rather than debate policies in the coming months, so no real change there, and they have convinced large sections of the media that this is an election between two coalitions.

Most telling was that one of the largest cheers of Ahern's presidential address was for his announcement that two long closed border roads Knockaginey Road and Ananaghroe Road on the Monaghan/Tyrone border were to be reopened. He did not mention that Sinn Féin and particularly Cavan Monaghan TD Caoimhghín Ó Caoláin had raised and campaigned on the issue of these roads for years and most recently in the St Andrews negotiations.

But in truth this ard fheis is the beginning of a new Fianna Fáil strategy where the details don't matter. As Ahern said himself, "we would all, I am sure lead perfect lives if hindsight were foresight". He was proud of his record and grateful for the chance "to serve all of Ireland, North and South". And so with one sound bite partition had ended, now with six months to election day, expect a lot more of the same, the theme of this election will be Bertie.