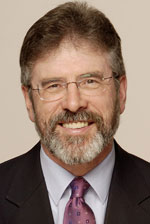 "The essence of republican activism is about making our politics relevant to people in their daily lives while all the time advancing, with increasing strength towards our goals", Adams said.

He went on: "At times this means taking risks. This is such a time. This is the time for all republicans to suspend scepticism about the intentions of the DUP or the two governments. This is a time for us to have confidence in ourselves and in our ability to deliver for the people of Ireland.

"Republicans do not have to agree on every issue. Indeed one opinion is as valid as any other. So at times we must agree to disagree. We must set aside differences of opinion and unite in pursuit of the common good.

"So I am appealing to republicans to have a sense of our own strength and our potential. I am appealing for maximum unity. But in particular I am appealing for everyone to move forward. Sinn Féin is not about standing still, marking time or going backward. Republican activism is about the future. We must have confidence in our collective ability to share that future."