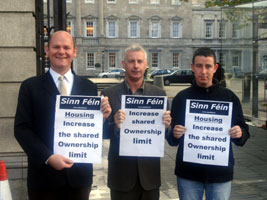 Sinn Féin Housing spokesperson Seán Crowe TD has called on the four local authority managers in Dublin to increase limits on the shared ownership housing scheme to reflect the reality of the housing market.

Crowe was speaking last Friday, after publishing the results of a Sinn Féin survey highlighting extreme difficulties in finding housing in Dublin within the limits of the shared ownership scheme.

He said: "The financial limit on the price of a house that can be purchased under the shared ownership scheme ranges from €210,000 to €275,000 across the four local authorities.

"Over the last couple of days, Sinn Féin activists carried out a survey of 24 estate agents throughout each constituency in Dublin and found just twelve properties that would fall within the limits of the shared ownership scheme. Eleven of them were within Dublin City Council; just one was found in Dún Laoghaire/Rathdown County Council and no suitable accommodation was found in Fingal or South Dublin.

"This survey highlights the difficulties young Dublin people are having when they try to find homes and build lives for themselves. There are thousands on the social housing waiting list in Dublin and hundreds have applied for the shared ownership scheme. By the looks of this survey, they will be waiting a long time.

"This is one of the reasons why Dublin people are living as far away as Mullingar. All of the very few properties that are available are severely overpriced and all but one are unsuitable for young families."

Crowe went on to describe the housing crisis as a direct result of the Government's cosy relationship with developers and speculators. The dilution of Part V of the Planning and Development Act 2000 - done at the behest of the developers - has allowed developers to pay €32million to local authorities in order to buy their way out of obligations to provide 20% social and affordable housing in all housing developments. All the while, the waiting list has soared, with 43,684 families currently waiting to be housed.

Sinn Féin is calling for the dilution of Part V to be abolished so that developers can no longer buy their way out of their obligations. "We are also calling for compulsory purchase orders to be made on land being held by greedy land speculators and for this land to be provided to the local authority for social housing," Crowe said.

He noted that Dublin City Council is to review its shared ownership scheme later this year but said that it was vital that the review is carried out with a view to benefiting people in need of homes, and not developers.

"I would call on Housing Minister Noel Ahern to put pressure on the other three councils in Dublin to carry out their own reviews as soon as possible. The maximum loan available from local authorities under the shared ownership scheme must be increased to reflect the reality of the current housing market in Dublin and to give Dublin people the opportunity to own their own homes in their own city," he said.