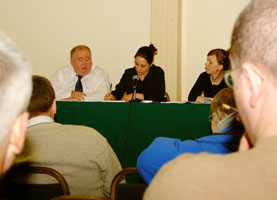 Fra McCann, Shannonbrooke Murphy and Stephanie Lord at the Conference

Seeking to establish a right to housing

Sinn Féin this week moved legislation in the Dáil to amend the Planning and Development Acts to close a loophole allowing property developers to buy their way out of social and affordable housing provision. The development followed hot on the heels of a party conference in Dublin last weekend dealing with Sinn Féin's policy on housing.

Organised by Sinn Féin's Policy Review and Development Department and chaired by Department Head Shannonbrooke Murphy, the national conference on Saturday, 28 October, was addressed by TDs Seán Crowe and Arthur Morgan and the party's spokesperson on housing in the Six Counties, Fra McCann MLA.

McCann gave an overview of the draft policy, pointing out that republicans have had a longstanding involvement with the housing issue, from the Land League of the 1800s to the civil rights movement of the 1960s and beyond.

He described the document before the conference as a tool by which Sinn Féin intends to establish a fully enforceable right to housing. Such a right, he said, is underpinned by several international covenants and the European Social Charter.

The failure of successive Irish Governments to establish a right to housing is directly responsible for the current housing crisis. The sharp increase in homelessness and the "explosion" in the housing waiting lists, alongside a reduction in the provision of social housing units, illustrate the depth of this crisis.

Housing as a right

Specifically, the Sinn Féin document proposes an amendment to the 1937 Constitution, a bill of rights for the Six Counties and an All Ireland Charter of Rights for a future united Ireland, to make housing a legal right. A National Housing Agency and a National Housing Strategy are required to address the issue, said McCann.

The overall aim is to eliminate homelessness by 2010. The immediate target is to fulfil 70% of all housing applications within two years. To this end, Sinn Féin is proposing the use of compulsory purchase orders to acquire land and derelict or vacant properties. The reclaiming of British military barracks in the Six Counties, and the acquiring of vacant barracks and other state lands surplus to requirements in the 26 Counties, would help reach a target by 2016 of 25% for social needs from the total housing stock, McCann said.

The National Economic and Social Council (NESC) report recommending the provision of at least 73,000 social housing units in the South by 2012 would also have to be implemented said the MLA.

Rampant property speculation, which has forced prices steadily up, would be tackled by a tax on second homes and a standard rate of 40% Capital Gains tax. Ground rents would be immediately abolished. Enhanced legal protection for tenants is also a priority.

Anti-social behaviour and the right to accommodation for Travellers and the disabled are also areas intended to be addressed in the policy document, he said.

During discussion of the document, Sligo Councillor Seán McManus pointed out that the voluntary housing sector suffers from a lack of accountability. He described co-operative housing as an area that needs to be explored and went on to say that the provision of social and affordable housing should be dispersed throughout developments to avoid ghettoisation.

Seán Crowe TD spoke of the knock-on effects of inadequate housing, particularly in the areas of health and education, while Waterford City Councillor David Cullinane spoke of the need to shift the balance of power on housing policy from city planners to elected councillors.

The discussion went on to cover topics such as occupier buy-out schemes, anti-social behaviour and the specification of direct percentage targets for both affordable and social housing. Following lunch, discussion ranged over areas such as homelessness and safe, sustainable communities.

Sinn Féin TD Arthur Morgan urged those in attendance to bring the discussion back to their local area and for party members to make submissions on the document as soon as possible. He said that Sinn Féin would be working with housing campaigns and various NGOs to have the policy document implemented. It would be the same campaigning approach the party adopted in relation to the health issue.