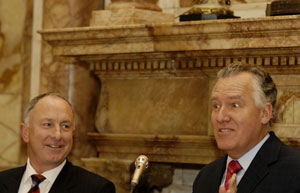 Collaboration, competition, globalisation, the knowledge economy, innovation, research and development and not to forget the prize of a socially inclusive island economy, these are the core themes of a major new economic study launched jointly last week by the British and Irish Governments.

But who is afraid to talk about the all Ireland economy and who is just giving it lip service, these are also some of the questions arising from the study that has surprisingly ruffled feathers among the two main unionist parties.

The 70 pages are the result of the combined thinking and analysis of two governments, seven separate departments, and the expertise of InterTradeIreland as well as some of the top economists in the country.

The study is important for two reasons. Firstly it is a clear statement of intent from the British and Irish Governments that they now understand and support an economic rationale for north south co-operation, for the first time they have targets and goals across a range of sectors including infrastructure, science, technology and innovation, labour market skills, enterprise and the North West.

Secondly, as important as it is to know how a government thinks it is just as important to know how its civil service sees things and elements of this document strongly reflect the priorities of the government departments that implement the economic strategies of politicians.

Collaboration and competition are the twin cornerstones of the document. The Irish economies need to be able to compete internationally, they need to develop labour market skills, create more firms, encourage more entrepreneurship, innovation and R&D and they need a better infrastructure backbone in the economy to make this happen. We should collaborate on the island and compete off of it.

That's the short version, but within this economic prescription are some other important messages. The first is that economic planning for the medium and long term is back with a vengeance. Yes, we need to promote enterprise but it is being hampered by planning failures such as lack of proper infrastructure like transport, telecommunications or failed labour market strategies and unworkable business development politics. This is one of the unstated issues of the joint government strategy - planning skills are perhaps the weak link in government abilities at present.

Social inclusion is mentioned but there are no tangible proposals on the need to include equality, anti-poverty and social economy measures in an all island strategy.

With two mentions of a socially inclusive island economy in the nine page executive summary compared to 16 mentions of the word competitive, competition etc or 17 mentions for collaboration and collaborative etc, you can see how the rest of the study is going to evolve, the term "world class" gets as many mentions as social inclusion so you can get the message. It is one of the drawbacks, social inclusion strategies merited a chapter with the same attention devoted to the issues as were given to other areas.

A centrepiece in the economic rationale for co-operation on the island is what the authors call "the innovation stage" of economic development, it is where both economies now find themselves, and "every source of competitive advantage must be exploited".

The future for the two economies is in knowledge based activities and for this you need skilled workers and hence an island-wide economic strategy.

The document also highlights a strategic rationale for economic collaboration. This includes recognising the "common challenges" on the island, addressing the negative effects of the border and seeing is it possible to create benefits by "market widening".

A long time Sinn Féin proposal for an all island approach to developing ports, airports and aviation is mooted but other than a commitment of €15 million to the City of Derry Airport there is nothing concrete here. There are some positive noises on renewable energy, and better co-ordination between electricity regulators as there is in telecommunications. There is also a commitment to all island collaboration in R&D as well as a new all island scheme to help the draw down of EU funds as well as linking companies with research centres.

Sinn Féin Finance spokesperson Caoimhghín Ó Caoláin welcomed the report. He said that it's significance lay in the fact that it "sets out a clear and strong economic rationale for the development of an all-Ireland economy". Foyle MLA and Sinn Fein General Secretary Mitchel McLaughlin said that the blueprint "must be supported by a substantial financial commitment from both governments". Ó Caoláin said such a package was what Sinn Féin had been continually pressing for.

Not so straightforward an endorsement was ever going to come from the Unionist political parties, but UUP MEP Jim Nicholson surprised many when he said "People get caught up very easily in the debate over closer North/South cooperation as yesterday's hype over the Irish Government's document demonstrated and forget about the obvious economic benefits that could flow from greater economic, social and environmental co-operation with Scotland.

UUP leader Reg Empey also hyped up the British economy role in the Six Counties saying that, "In our view, this document is based on a false premise that somehow there is an all-island economy." Empey did admit that, "there is a case for co-operation in business and trade and that is what we support".

However for Empey, "The new all island document seems to be intent on turning the Northern Ireland economy into a region on the island of Ireland". The document was according to Empey "all island this and all island that". Finally he said "This document has the potential to poison relations between Northern Ireland and the Republic at a time when progress was being made".

The DUP's Gregory Campbell also reacted strongly and said, "The DUP believe in co-operation between Northern Ireland and the Republic of Ireland that is to the benefit or our province, but that "It must be practically, not politically, motivated".

Campbell broadened out the DUP position saying "What we in the DUP will be saying to Dublin is that if your understanding of this arrangement is that this money is designed to build up an all-Ireland economy, we're not going there."

This is not a republican document and only touches off the Sinn Féin vision of what a united Ireland economy could be, however the belated recognition of the potential for collaboration is a welcome development.