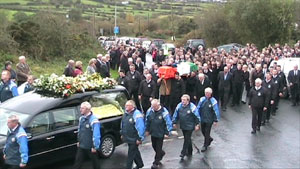 Over 1,000 mourners attended the funeral of Gerald Fearon (inset), a highly respected man in the South Armagh community

Gerald Fearon, from Dromintee in South Armagh, who died in a road crash on Friday night 27 October, was an IRA Volunteer.

The crash that occurred just before midnight on the Dublin Road in Newry involved the Renault Clio van in which 26-year-old Volunteer Fearon was travelling and a Peugeot 406 taxi.

Volunteer Gerald Fearon was buried in Dromintee on Monday 31 October. His coffin was draped in the National flag with beret and gloves placed on top and was flanked by a republican Guard of Honour.

Over 1,000 mourners attended the funeral for a man who was highly respected in the South Armagh community as well as among his comrades in Óglaigh na hÉireann.

Gerald Fearon was also a member of his local Dromintee GAA club and played for the club. While his father Peter is the club chairperson.

Speaking to An Phoblacht Sinn Féin councillor Anthony Flynn said, "Gerald was well known in the area and will be missed by all who knew him, especially his family".

The graveside oration was delivered by South Armagh republican Seán Hughes who said that Fearon was a quiet and unassuming young man who got things done with little fuss. He said that when his comrades came together in recent days to reflect on Gerard, what stood out was that he was always there. He was in the middle of everything and was eager to do more. No challenge was too great or too small.

Hughes said Fearon embraced the present phase of the struggle with the same enthusiasm and vigour as the previous one. He joined the Jim Loughrie Sinn Féin Cumann and was appointed organiser.

"He took great pride in the fact that last December, himself and a comrade organised a highly successful Loughrie Campbell commemorative function.

He was an energetic republican activist who worked tirelessly throughout many election campaigns, and was involved in many community projects in his local area.

As recently as last week he took responsibility for the distribution of the local republican new sheet An Nuacht, in the greater Killeavy area. This is a further example of Gerard's motivation.

"Gerard was an example as to how any republican should carry themselves, he was an ambassador for the movement, and his family are rightly very proud of him, and he will be sorely missed by them."

Hughes said Fearon would also be missed by his republican comrades. On behalf of the republican movement he offer sympathies to Peter, Helen, Aoibheann, Geraldine, Michelle, Patrice, Petie and Miceal and to his Grandparents Niall and Anna, to his Aunts, Uncles and wider family circle.