Adams tells Brown to address legacy of colonialism and partition 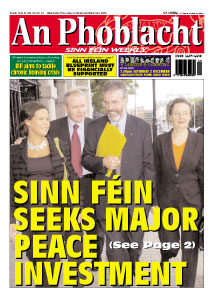 This Wednesday saw a meeting between British Chancellor of the Exchequer Gordon Brown and representatives of all the political parties in the Six Counties in relation to a peace dividend.

The meeting followed last week's announcement from the Irish government setting out key elements of its contribution to a peace dividend.

Speaking during the all-party meeting Sinn Féin President Gerry Adams said that building a strong economy was an important task facing any incoming Six County Executive and all-Ireland Ministerial council. He said the primary political focus must be on bringing about a situation where Ian Paisley and Martin McGuinness are equal partners in government.

"Their responsibility with their Executive colleagues will be to propose solutions to the crisis in the health service, in education, in our rural communities, in job creation and transport. They have to find solutions to the problems confronting our young people, our elderly and disabled", said Adams.

The Preparation for Government Committee and its Economic Sub-group had held valuable discussions on a peace dividend and other measures to transform the economy. Such a package was essential to buld a modern economy with a highly skilled workforce, strong public services and a vastly improved road, air and rail network. It was also needed to redress decades of under investment West of the Bann.

To help deliver these basic requirements Sinn Féin is calling for a £10 billion peace dividend from the British exchequer, to be supported in a substantial way by the Irish government.

"Our five parties have different opinions and analysis on many aspects of the situation in Ireland and the relationship between our people and the people of these islands. But today we are united in meeting the challenge to build a strong economy. And to achieve that we need an integrated, strategic and democratic approach", Adams said.

He went on to say that the all-Ireland economic development strategy Sinn Féin is campaigning for was about "investing in the long term economic transformation of the North and border counties and developing a joined-up all-Ireland economic approach which can significantly improve the quality of life of every citizen".

Adams said the cost of rebuilding infrastructure, particularly in water and roads, to a standard required for a modern economy, could not be met through the current budget allocation. Hecsaid further penalties on the tax payer to meet this cost either through water charges or rates was not sustainable.

"The republican view is that the current deplorable state or our infrastructure and economy is a result of the policies of successive British governments."

Adams said the legacy of colonialism, partition and being at the edge of the British exchequer puts the North at an economic disadvantage and that the British government had a responsibility to redress this.

Last week the Irish government set out elements that will make up its contribution to a peace dividend. He was now asking the British Chancellor to be generous in respect of his government's responsibilities.