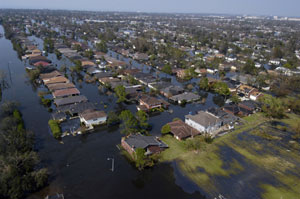 A tropical Ireland? Melting ice-caps? Disappearing glaciers? Climate change has become part of the vernacular and a reality of our times. However, little is being done by those responsible for the "ozone crisis" to solve a problem that is threatening not only nature, but human survival. However, there is good news, as Nicholas Stern, a former chief economist with the World Bank, warned governments that climate change could tilt the world's economy into the worst global recession in recent history. So, maybe those who choose to ignore the Kyoto Protocol and other international agreements aimed at decreasing pollution levels may decide to change tack now that their economies are in danger.

The findings of Stern's report are controversial as they point out that fighting global warming will save industrial nations money, something which contradicts with those leaders and businessmen opposed to the Kyoto protocol who, like George Bush say that action against climate change will "harm the economy".

It is now known that some governments and businesses are suppressing reports on the effects of global warming while promoting others that do not establish any link between pollution and the effects of climate change.

At the beginning of September, it become known that the Bush administration in the US had blocked the release of a report suggesting that global warming is contributing to the frequency and strength of hurricanes. The impact of warming conditions on the strength of storms has featured in the debate in the US particularly in the wake of the Hurricane Katrina disaster in New Orleans.

A series of studies over the past year have shown an increase in the power of hurricanes in the Atlantic and Pacific oceans, a change that many experts believe is closely related to the rising sea-surface temperatures.

Last May, Journal Natura said that when the report was prepared by a group of weather experts at the National Oceanic and Atmospheric Administration, panel chair Ants Leetmaa received an e-mail from the Commerce Department saying that the report was too technical and would not be released.

The possibility of global warming affecting hurricanes is sensitive as the Bush administration is still resisting proposals to restrict the release of gases that cause warming conditions.

At the same time, Britain's scientists have challenged US oil company ExxonMobil to stop funding research aimed at undermining the links between pollution and climate change.

The Royal Society has written to the oil multinational to demand the company withdraws support for groups that "misrepresent the science of climate change by outright denial of the evidence".

The Society found that ExxonMobil last year distributed around $2.9 million to 39 groups, including the International Policy Network , a group based in London that in 2004 put together a report with the Scientific Alliance claiming that global warming was not related to increasing pollution.

In extracts of a letter sent by Bob Ward of the Royal Society to ExxonMobil and published by The Guardian newspaper, Ward asks the multinational to provide him with the names of those organisations "in the US and other European countries that have been receiving funding so that I can work out which of these have been similarly providing inaccurate and misleading information to the public".

Financing of particular groups of research whose results will suit the interests of particular energy companies and governments seems to be a standard activity of lobby groups trying to undermine the overwhelming scientific evidence that emissions are linked to climate change.

One such group, the US Competitive Enterprise Institute - whose directors have descried global warming as a myth - responded to the release of Al Gore's film on climate change, An Inconvenient Truth, with advertisement welcoming increasing carbon dioxide pollution.

However, their resource to mass publicity is failing to win public hearts and minds. A recent CBS/New York Times poll shows that four in every five Americans - including three out of every five Republicans - believe it is a serious, or very serious, threat and that three quarters of Americans and more than half of Republicans insist that action must be taken to counter it "right away". Even George Bush, the man who tried to kill the Kyoto protocol, may be planning a U-turn.

Israel's PM, Ehud Olmert, has said that his government is planning a new military offensive in Gaza. The announcement came as the Israeli cabinet approved the addition of right wing, zionist party into the governing coalition to strengthen its position ahead of a series of crucial votes.

Election officials in the Democratic Republic of Congo are counting the votes from one of Africa's most significant elections for many years in which President Joseph Kabila faced ex-rebel Jean-Pierre Bemba in a run-off.

Voting was mostly peaceful but a drunken soldier shot dead two election workers sparking riots, and at least one person died in protests over alleged fraud in the north-east.

Congolese people hope the election will end years of conflict and abuse of power. Results are not expected to be announced for about a week.

Two vehicle bombs exploded outside two police stations in attacks in two towns east of the Algerian capital during the night of Sunday 29 October. The near-simultaneous blasts took place in Reghaia, 30km east of Algiers, and neighbouring Dergana. According to witnesses, at least one person was killed in the attacks and about 14 were injured.

Brazilian President Luiz Inacio Lula da Silva has been re-elected in a clear victory, polling more than 60% of the vote against rival Geraldo Alckmin. "We will give attention to the most needy. The poor will have preference in our government," said Lula who narrowly failed to win in the first round, forcing Sunday's run-off.