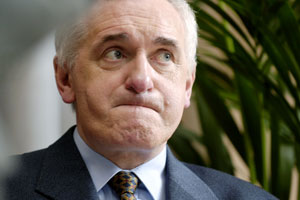 This has been an exciting week (fortnight, indeed) for the media with speculation whipping the hacks into a state of righteous frenzy as the Bertie scandal petered out in a damp squib debate in the Dáil.

Wishful thinking rather than any serious analysis of the facts has dominated the coverage, with the Irish Times of course leading the charge in pursuit of its Fine Gael agenda.

Madame editor herself, Geraldine Kennedy, explained to a pliant group of hacks - many of whom were plainly hoping for future employment with her - that she had acted in the "public interest" in breaching the confidentiality of the Tribunal.

Public interest or not, Madame editor justified her subsequent destruction of the documents she had illegally obtained on the basis that she had to do so (i.e.break the law) to protect her source.

All journalists will uphold the principle that a source must be protected, even at personal risk of the court's displeasure, but it was hard to keep my breakfast down as I listened to Madame editor proclaim this to the public.

This, after all, is the same editor who wrote in quite a different vein about the Ros Dumhach Five who were imprisoned for refusing to yield to a court order in respect of Shell's activities in Mayo. Then Geraldine Kennedy praised Justice Joseph Finnegan for having had the courage "to uphold the law of the land". Will she be so keen on judges upholding the law of the land when she appears for having wilfully destroyed documents which the Tribunal ordered to be handed over to it?

This is the key point. Newspapers like the Irish Times consider themselves to be above the law which they believe to be sacrosanct in respect of everybody else.

Certainly, the information is interesting and it does not reflect well on the Taoiseach that he took such money from his rich cronies. But Geraldine Kennedy decided to publish this information because - as her own defenders have explained - the Tribunal was unlikely to discuss it in any public forum as it was outside the Tribunal's terms of reference.

In other words, the Tribunal was unlikely to examine these payments, but Kennedy believed that public knowledge of them would discredit the Taoiseach.

Of course, Government whines about the impropriety of leaks are a bit hard to take when we remember how Michael McDowell's tame journalist, Sam Smyth, was given files form the Department of Justice to discredit journalist Frank Connolly whose inquiries both into allegations of wrong-doing by the Taoiseach and into the shambles of the new prison site in North Dublin had so angered the Government.

Some politicians did, of course, refer to this. But you can search the pages of the intrepid media in vain for any reference to this Governmental hypocrisy.

Instead across the board the media have rallied to defend themselves.

Thus, speaking on RTÉ radio, Irish Examiner Political Editor, Harry McGee, bridled at the idea that journalists were given special privileges in our legal system. "Journalists have no immunity for their sources," he intoned.

But when did a journalist last go to jail on such an issue? In contrast, of course, to the Ros Dumhach Five. The last was Kevin O'Kelly, but his case concerned a republican issue when he refused to confirm comments allegedly made by Seán MacStiofáin.

The fact is that whatever the law says, in practice judges will not use a heavy hand against the likes of Geraldine Kennedy.

If she were one who cast her net broadly over political life and fairly dealt with all issues, then a little bit of bombast could be forgiven.

But, like the politicians of Fine Gael and Labour the journalists ignore the issues that actually concern ordinary people - health crises, hospital reform, housing costs, traffic chaos, pressure to lower wages, and so on.

These issues merit no media hysteria - because, of course, the people who own the newspapers are the people who benefit from the policies that cause problems for others.

Meanwhile, during the period of this artificial crisis, there has been almost no discussion of the non-publication for five months of the report into the Leas Cross nursing home or the non-implementation of its recommendations, nor of the C&AG's report on the scandal of the prison site in North Dublin purchased at twice its proper price.

It's a sickening display, because there are real issues involved - but not the interests of the newspapers who want to keep the policies but change the personnel.